LOCS: Graduating with the class of 2020

LOCS Superintendent Marion Ginopolis will regularly share thoughts and updates about district-related topics in the Review. When I announced that this would be my final year as superintendent of the Lake Orion Community Schools, a high school student tweeted, “When you know 2020 is Mrs. G’s favorite class because she’s graduating with us.” Like our […]

Sponsor a jersey for ‘Football for a Cure’

The second annual Football For A Cure game between Lake Orion and Clarkston high schools isn’t until Oct 18, but now is the time to sponsor a jersey to aid cancer survivors during their treatment. Anyone who wants to help tackle cancer head-on can sponsor a jersey. Players from both teams will wear the jerseys […]

By CJ Carnacchio Oxford Leader Editor When James Muys agreed to become the chaplain for Veterans of Foreign Wars (VFW) North Oakland Post 334 in 2015, he did so because it was a “position that had to be filled and nobody really wanted it.” “I guess I kind of got it by default,” said the […]

The Lake Orion Police Department (LOPD) responded to 132 calls from Aug. 19-25, 2019 • Felony Arrests: 0 • Misdemeanor Arrests: 7 • Accidents: 5 Texas? But I didn’t rent a white Cadillac convertible with steer horns A 42-year-old Lake Orion woman reported to police at noon on Aug. 21 that she received a call […]

Let the public use the parking spot

There is a privilege parking spot (having been grandfathered in for years) located on Front Street, just east of 55 S. Broadway St., for the exclusive use of this business. Delivery trucks always park on the street anyway, and this property has a private driveway adjacent. Let the public have a place to park. Ron […]

The Oakland County Sheriff’s Office is kicking off its Just Drive campaign to educate and raise everyone’s awareness about school zone safety laws in order to prevent a tragedy. School zones, combined with changing traffic and weather conditions, create an extremely dangerous situation. The sheriff’s office strongly urges drivers to slow down and allow additional […] 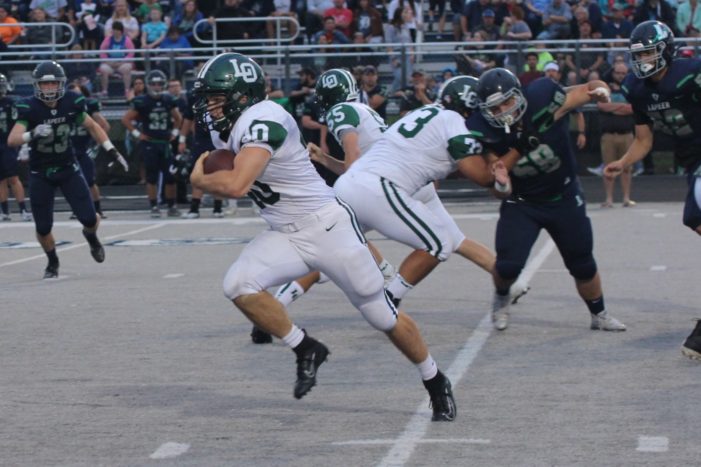 By Joe St. Henry Review Sports Contributor With storm clouds looming overhead, Lake Orion’s varsity football team produced its own thunder and lightning in its first game of the season to beat Lapeer, 17-7. The victory avenged last season’s loss to the Lightning and snapped the Dragons’ five-game losing streak on opening night. The contest […]

By Jim Newell Review Editor Mothers, sisters, wives, daughters, friends, colleagues. Most people know someone in their lives who has been affected by breast cancer. And real men wear pink – especially when raising awareness and donations for the American Cancer Society’s Real Men Wear Pink campaign. This year, the Orion area has four Real […]

This year’s team is led by returning All-State runner Andrew Nolan. Nolan is a senior, and has earned All-State honors the past two seasons. Nolan is a very competitive, strong runner, and looks to put himself in with some of the best runners in the state again. Nicholas Laurent is a junior, running his first […]