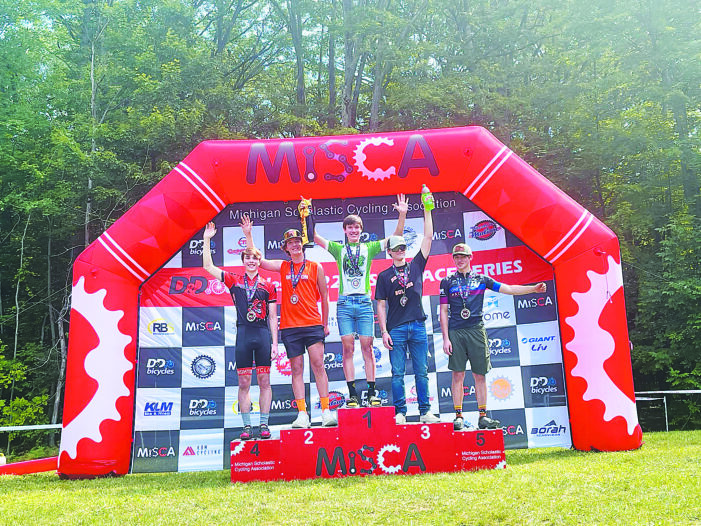 HARRISON, Mich. – The Dragon Mountain Bike Team kicked off its six-race season at the mountain bike trails at Mid-Michigan College on Aug. 27-28, with several members of the team reaching the winners’ podium.
“It’s a great course to start the season off because there was nothing too challenging or technical on the trail,” said head coach Nick Shaskos.
This first race format was a time trial where the students raced against the clock to vie for the best time.
“It’s anybody’s game really. We don’t know where riders finish until the last rider crosses the finish line,” Shaskos said.
During the season, the team will normally begin each race in a mass-start format with all riders taking off at once.
Some highlights of the weekend include the senior Captain Jon Meyer “riding an incredible race,” Shaskos said. “While crashing on his second lap Jon still managed to win the top spot on the podium impressively by finishing three minutes before the second-place finisher.”
The Lady Dragons were not to be outdone.
In the Lower Elementary Division, seven of the girls finished in the top 10 and “four girls raced their hearts out for places first through fourth on the podium,” Shaskos said.
Other podium finishers that got their first medals in racing include Anthony and Joey Mucci, Joey Bilderbeck, Kevin and Mark Morgan, Devon Gross, and Riliegh and Adelyn Lucia.
Follow the team online at: https://lakeorioncyclingteam.wordpress.com and facebook.com/lakeorioncyclingteam.
– J.N.

Dragon Mountain Bike Team pedals to the podium added by mmkelley on September 7, 2022
View all posts by mmkelley →

One Response to "Dragon Mountain Bike Team pedals to the podium"