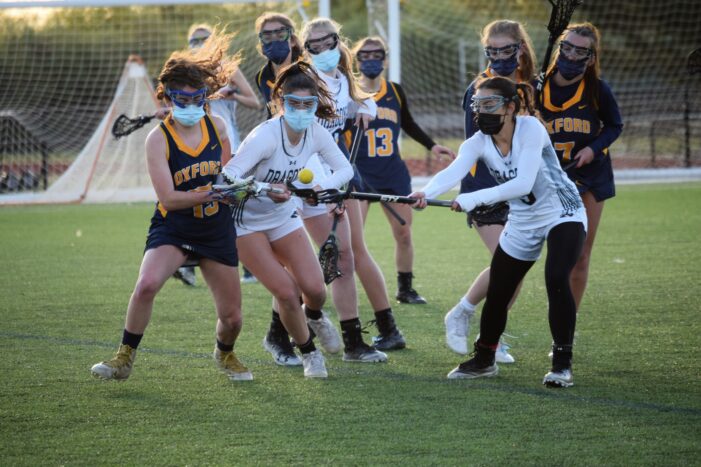 The Lake Orion girls varsity lacrosse team is 14-0 after a 17-3 victory over Rochester Adams on Monday night.

Now, the Dragons face their toughest opponent of the season, undefeated Midland, tonight on the road. Midland is one of the top-ranked teams in the state – sixth on LaxNumbers.com – and has two of the state’s best scoring threats.

While the Dragons, ranked 14th in the state by LaxNumbers.com, will have to play their best game against Midland, the team is certainly capable of pulling out the win.

Lake Orion head coach Emily Vican knows that Midland will be the team’s greatest challenge of the season thus far, but she has faith in her team.

“I think them getting this far is just unbelievable. To come back from last year not playing at all, to this year is just incredible. They’re hungry, they want to play,” Vican said.

For Vican, the way Lake Orion played against league rival Clarkston on April 30, pulling out a dominant 23-10 win on the road without their starting goalie, junior Paige Walker, showed the coach that her team is capable of overcoming any obstacle.

“The girls surprised me with Clarkston. I was nervous all day going into our Clarkston game, because Clarkston is a very good, aggressive team…the defense really stepped up,” Vican said. “Midland is going to be tough, but if I can get them to play the way they played at Clarkston I think we might have a good chance.”

One of the Dragons’ greatest strengths is the cohesion on the team – the players all support one another, genuinely enjoying playing together and have avoided any divisiveness.

Lake Orion is also well-balanced, with a strong attack and solid defense and depth from the bench. The Dragons have outscored their opponents 236 – 64 through 14 games.

“Our goalie is just unbelievable. Sometimes I tell her, ‘Paige, you carried the team on that one.’ I have to give her some credit too, because her save percentage is 71 percent, which is unbelievable.”

Vican also praised assistant coach Marta Davila and her work with the team’s defense. Two of the Dragon defenders – seniors Julia Ames and Amelia Stevenson – have signed to play lacrosse at Albion college.

Lake Orion plays Chippewa Valley on Friday to finish the regular season, and then plays Oxford on May 24 in the first round of the playoffs. The Dragons have previously beaten Chippewa Valley 17-1 in April.

The Dragons beat Oxford 14-7 on May 5 and were never in danger of giving up their lead.

Freshman Morgan Vasquez had three goals and one assist, while freshman Gina Haddad and sophomore Kate Shifferd each added a goal.

Senior Bella Denton had two assists and senior Audrey Giacolone and sophomores Reagan Haas and Sophia Beemer all had assists.

LO girls lacrosse will take on state-ranked Midland in a battle of undefeated teams added by mmkelley on May 12, 2021
View all posts by mmkelley →