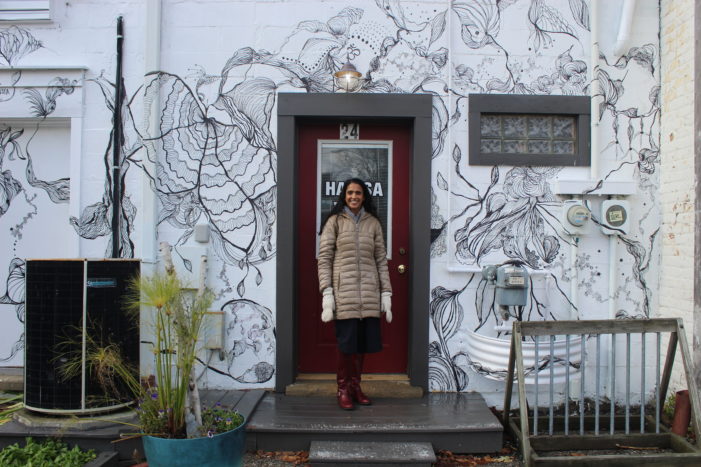 In recent months, art in downtown Lake Orion has become a welcomed addition. With the DIA Inside Out taking place over the summer and with the approval of a DIA mural, the downtown has seen beautification become more of a priority than years past.

A new addition to the downtown landscape is also a new mural located at Hamsa Yoga Studio.

When the landlord primed the back of the building, the thought of what could be added to the wall to add a little bit more beauty to the building started to float around.

Without much of a plan in place (that’s how she likes to create) and various black Sharpies in hand (yes, the mural is drawn with Sharpies), she started work on a mural on Aug. 30.

About six sharpies later, in mid-October, the mural was complete.

Since then, not only have people passing by enjoyed the new art, but other businesses have taken notice, with some even hoping to get in on the action a little bit.

For those who are looking for a challenge, there is a plethora of birds hidden in the mural.

According to Patel, the most anyone has found is 36, but there are more.

Patel is hoping to further beautify the area by adding a sculpture she had made when she first moved to the area.

Patel has done work in various other locations, including Oxford in 2015.

More of her work can be viewed at www.ritapatel.com or on Instagram at @ritagpatel.