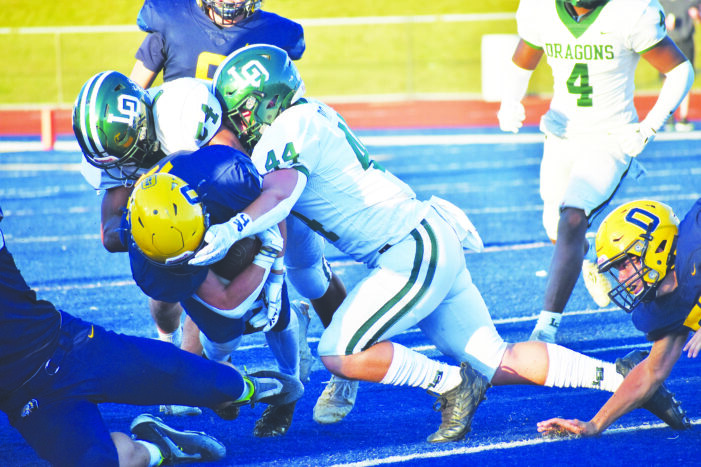 By Jim Newell
Review Editor
OXFORD — There are no easy games in the Oakland Activities Association Red division, especially when your team is playing one of its biggest rivals.
So it was no surprise when Lake Orion traveled to Oxford on Friday that the Wildcats were going to come out and play fierce football, especially in front of a packed stadium and home field advantage.
What was surprising was how easily Oxford seemed to dominate the first quarter of play.
“They’re always hard fought. Oxford played a heck of a game. They’re tough as can be, they’re well coached. They gave us some problems,” Lake Orion head coach Chris Bell said. “I’m just proud of my kids and how resilient they were. They hung in there, they kept playing and they got the job done.”
Bell had said in the preseason that this year’s defense might be one of the best the school has seen in a long time and they were put to the test right from the kickoff.
Oxford received the ball to start the game and held on to it for nearly nine minutes, wearing on the Dragon defense right from the opening drive.
After eating up the clock and marching down the field, the Dragon defense stymied the Wildcats near the red zone. After several attempts, Oxford could not find the endzone and had to settle for a field goal, going up 3-0.
Lake Orion, however, went three and out and had to punt on their opening drive.
In the second quarter, Lake Orion got on the board with 9:40 left in the half. Sophomore quarterback Tristan Hill broke through the Oxford defense and tumbled into the endzone, giving the Dragons the 7-3 lead.
That score held until the second half.
In the third quarter, after a Lake Orion drive went three and out, Oxford took over with good field position. The Wildcats managed to find the endzone and went up 10-7 with seven minutes left in the third.
That score could have deflated the Dragons. The green and white, however, used that touchdown as the impetus to redouble their efforts.
“That’s the perseverance piece and that’s part of growing. They went down and scored, it wasn’t looking great but our kids knuckled-down,” Bell said. “We made a couple of adjustments, they made some big runs and from there I don’t think we could be stopped at that point going forward.
“That’s a character piece for them. Sometimes they have to go through it. Young teams, they’ve got to learn when you’re down you have to stay in it, it’s a long football game, especially in the OAA Red. The game is going to go back and forth; you’re not always going to blow people out so they had to stay with it. I’m proud of them that they did,” the coach said.
From then on it was all Lake Orion. The Dragons scored three unanswered touchdowns for the 28-10 win.
Running back Billy Roberson broke through the Oxford line with 2:32 left in the third, putting the Dragons up 14-10.
Once they took the lead, Bell said they knew they could not afford to let up and allow Oxford back in the game.
“Not at all, not against any team in the OAA Red. They all have (good) players, so no lead is safe,” Bell said.
With a little over nine minutes left in the game, Roberson again found the endzone giving the Dragons a 21-10 lead.
Hill added another touchdown with 4:14 left in the game, ensuring there would be now Oxford comeback.
What does the win mean for Bell’s team?
“It’s a rivalry game, obviously. So, community bragging rights. It’s good for our guys. Our guys know they brought the (Double 0) trophy home,” Bell said.
Now, the team is focusing on the Clarkston Wolves, who will go into Dragon Stadium on Friday after a big win against Rochester Adams last week, 45-35.
Bell knows that his team needs to be prepared and play its best football against the Wolves.
“We’re going to celebrate tonight,” Bell said after the win against Oxford. “We’ve seen them (Clarkston) on film. They are a great team. They’re probably one of the favorites to win it all. We’re just looking forward to the opportunity to play them. They’re coming to our place and it’s going to be a fun night.
The Lake Orion-Clarkston game starts at 7 p.m. Friday in Dragon Stadium.

Dragons tame the Wildcats, 28-10, in rivalry game added by mmkelley on September 14, 2022
View all posts by mmkelley →