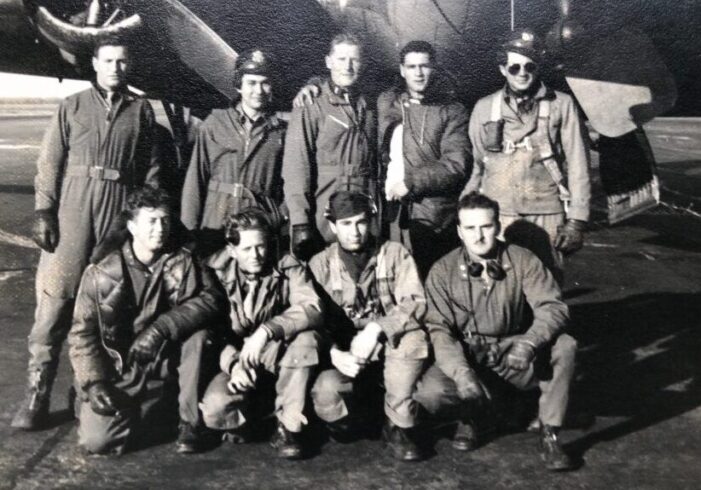 Detroit native and World War II veteran George Gehling, 94, may be a little forgetful at his age, but his memories of serving his country nearly eight decades ago are vivid.

Some of them are sad, while others uplifting. It has not always been easy for him to talk about what he did and saw. But, like many aging veterans, he is more open to sharing his memories of the war today, given the fact that there are only about 325,000 veterans alive out of 16 million who served during World War II, according to the National WWII Museum.

Gehling’s daughter Janice Deschaine, 57, said her father never shared stories of the war when she was young, partly to protect her and her siblings, but also because he felt he lost part of his youth during this time and he had nightmares of what he experienced.

“It was only over the last decade or so that my mom encouraged him to share his stories,” she said. “Sharing them has been therapeutic for him.”

Gehling was a gunner on a B-17 bomber that flew more than 25 missions over Germany in 1944, part of the Allies’ push into the German homeland, leveling multiple military targets and cities. He knows civilians died. Germany surrendered soon after, however, and the crew he was part of then flew humanitarian runs to drop food to starving concentration camp survivors.

“I guess I experienced a lot, but I’m no hero,” Gehling said. “We were just doing our jobs.

“But there’s no doubt the air force provided the turning point in the war. We destroyed Germany and the only thing they could do was surrender.”

When his dad finally began telling his stories of the war, his son Gary, 61, was impressed.

“I remember studying World War II in history class,” he said. “We read about the bombing of Berlin and Dresden. I had no idea that my dad was involved in both of those raids. I didn’t find out until a few years ago. I can’t imagine doing that as an 18-year old.”

Gehling did not wait to be formally drafted with the war raging in 1943. While most young men ended up in the U.S. Army, he went to the local recruiting office in his neighborhood the day after he turned 18 and told the officer in charge he wanted to be in the U.S. Army Air Force.

“I guess I was pretty convincing that was what I wanted to do,” Gehling said. “As I was walking out the door, he called me back in and told me he was going to backdate the paperwork so it would appear I volunteered for the air force.”

Everyone who joined the Air Force wanted to be a fighter pilot, including Gehling, but there were already plenty of pilots, so he was assigned to a bomber crew. After training near Las Vegas, his crew and their B-17 named Maiden America were sent overseas and staged in England. On missions, their plane always led the formation of 36 bombers, due to the skill of its bombardier.

“He was the reason we were always in front,” Gehling said. “When he said ‘bombs away’, all the planes dropped their bombs at once. We knew what kind of damage was being done.”

Gehling said his crew was lucky. In fact, he does not remember anyone in his formation of 12 bombers being killed in action. But he did see planes go down, hit by German anti-aircraft fire. The Germans gauged how high the bombers were by flying jets by them and then radioing it to crews on the ground. The jets were traveling so fast, it was futile to try and shoot at them.

“Once we saw a jet, we immediately increased our altitude by 2,000 feet,” Gehling said. “We could see the anti-aircraft flak exploding below us.”

Gehling is still haunted by the fact that the Air Force lost more men in World War II than the Army, Navy and Marines combined. The beginning of the air war in Europe was especially dangerous, he said, with half of the U.S. bombers shot down because they were not protected by fighter escorts.

“Remember, each bomber had a crew of eight or nine men,” Gehling said. “Multiply that by how many bombers were shot down, hundreds of them.”

The fuel tanks on the fighter planes could not carry enough fuel to escort the bombers all the way to their targets. The turning point came when the Air Force figured out how to retrofit P-51 fighters with external fuel tanks, so they could engage German fighter planes deep inside enemy territory.

Gehling did have close air encounters with German fighter pilots. He remembers one being so close that he could tell the German pilot looked no older than 15 or 16-years old.

“He saw me, I saw him,” he remembered. “They were so young because we were killing so many of their older pilots. Of course, I was young too.”

Toward the end of the war, the Germans were putting up little or no defense to protect their cities, including Berlin, the German capital. Gehling said they knew civilians were being killed by U.S. and British bomber runs. British leader Winston Churchill demanded the entire city be bombed because of the civilian casualties inflicted by the Germans on London, he explained.

“We were doing our jobs, but I did feel sorry for the people,” Gehling said. “I’m sure many of them hated Hitler at that point. He was a madman.”

Gehling does take solace in the fact that once Germany surrendered, the B-17 crews’ new missions involved delivering critical food supplies to thousands of concentration camp prisoners. Gehling said the plane flew less than ten feet off the ground so burlap bags of rice could be dropped safely. It was dangerous, but the crew was glad to do it.

“You could see the starving people – they were like skeletons,” Gehling said. “We could only deliver food to the camps where U.S. soldiers were in place. They had to ration the food because if the survivors ate too much too soon, they could die.”

After Germany formally surrendered, Gehling and his crewmates were supposed to go to the Pacific theatre to fight Japan. They traveled from Europe back to the United States by boat. He planned to travel from Boston to Illinois for redeployment, but the war ended in 1945 after two atomic bombs were dropped on Japan.

Gehling returned to Detroit, where his sister got him a job as a lineman for Bell Telephone. He only worked one day there, however, after an old friend told him about job opportunities with the Detroit Fire Department.

“I had just worked all day, up in the air in the heat,” Gehling said. “I saw my buddy and a couple of his fire fighter friends in a new car with their bathing suits hanging in the window. I knew that was the job I wanted. My sister understood.”

Gehling spent 32 years as a Detroit fire fighter before retiring in 1985. His wife Gloria passed away in 2015. These days, his children rotate visiting him in Florida and they make it a point to have him share his stories. Not only are they interesting, but the effort works his mind.

When he goes out, Gehling wears his World War II veteran hat. His daughter Janice notices how proud he is when people thank him for his service to the country.

“The public should never underestimate how much it helps veterans to know we are grateful for their service,” she said. “It’s helped my dad heal and feel like a hero, knowing people appreciate his efforts to protect our freedom. We will pass his stories along for generations in our family.”