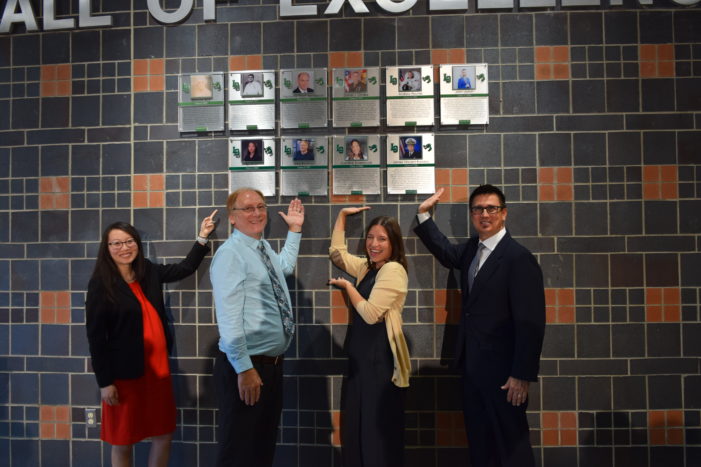 An astronaut. An entrepreneur. An innovator. Is there a Lake Orion High School grad who’s gone above and beyond in their post-graduate career to achieve notable success?

Nominations for the 2019 class are due by June 1 and anyone can nominate any Dragon graduate who meets the criteria.

“I would say that we depend on the Lake Orion community for these nominations, as the memory of people who work at the school only goes back so far, and it’s also difficult to know what every alumnus is doing, decades after they graduated. Our best resource is our community,” said Associate Principal Kyle Meteyer, who spearheads the Wall of Excellence.

Alumni of Lake Orion High School who graduated in 2012 or earlier and have achieved exceptional accomplishments in their chosen occupational field are eligible for nomination.

“We’re looking at this as a way to recognize not only the alumni, but also to motivate and inspire the kids who are here now,” said Meteyer. “This is not something that is out-of-reach of any of the students who are here today.”

“I think it’s important for the community. What we are hoping is that we get a diverse set of applications, going back to different eras,” Meteyer said. “We’re really hoping that when we get the word out, we get some nominations the community wouldn’t know about.”

The selection committee consists of school administrators, teachers and board of education members, and school officials will host an induction ceremony for the third class of nominees in the fall.

Athletes will not be excluded from consideration, but athletics is not the focus of Wall’s intent, Meteyer said.

Nomination forms are available at www.lakeorionschools.org/district/alumni/wall-of-excellence and can be submitted online. Nominators will also submit a letter explaining why the nominee should be considered for induction to the LOHS Wall of Excellence.

“To nominate an individual, a nominator should fill out the form (which is just basic information on the nominator and the nominee) and submit a letter with the form that explains in greater detail the person’s ‘story’ and what the person has achieved,” Meteyer said.