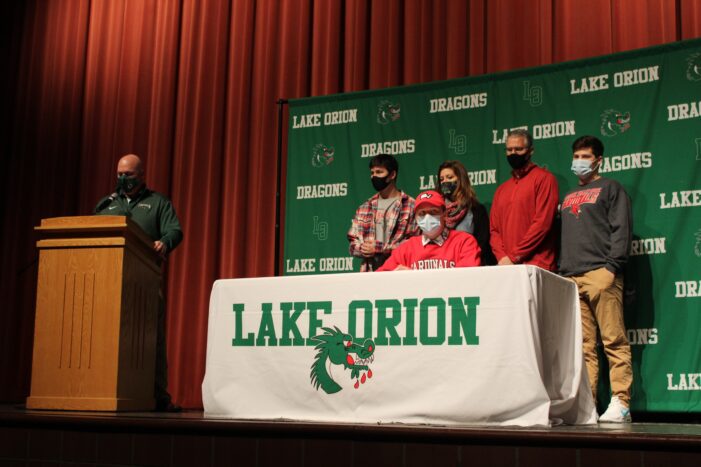 On the morning of Feb. 3, twelve Dragon athletes signed letters of intent to play their respective sports at the college level.

Due to COVID-19 restrictions, the traditional collective signing after athlete introductions was scratched in favor of an approach that would allow for proper distancing.

As in years past, LOHS Athletic Director Chris Bell began by offering words of advice to the young athletes as they prepared to take the next step in their athletic careers.

“Student-athletes, obviously this is a great accomplishment. You’re one of the elite, one of the few – take all of the student-athletes that play high school athletics, there is only a few of you that have this opportunity to go on and play college athletics,” Bell said. “This is not a destination, this is only the beginning, the beginning to a new chapter.”

In the true to tradition sentiment, Bell gave the students an idea of what they have in store for them in the coming years.

“One of the things about playing college athletics, it’s a great experience, it’s different than high school, but I will tell you, student-athletes, it will be a life-changing and life-enhancing experience,” Bell said. “I will tell you early on, it will be difficult, sometimes lonely…All these things that coaches told you about ‘stick to it’, ‘show up every day and work hard’, those lessons are really going to come into play when you’re a freshman or you’re a sophomore and you’re competing with juniors and seniors who have been there for a while…I will tell you, if you can stick it through and you can be dedicated to your academics; the opportunities, the lessons you learn, the growing that you will do as a student-athlete, they will serve you well for the rest of your life.”

Kicking off the signing was Taylor Butkewicz who was introduced by varsity volleyball coach Tony Scavarda. Butkewicz signed her letter of intent to play volleyball at Rochester College.

Teagan McAuliffe was also introduced by O’Niell. McAuliffe signed her letter of intent to be a member of the bowling team at Quincey College.

LOHS girls soccer player Elizabeth Reginek signed her letter to play at Tiffin University in Ohio after being introduced by Amanda Hutchinson.

Lacrosse players Caden Loken and Sean Henige each signed letters of intent for the University of Detroit Mercy. Both were introduced by the head coach for varsity boys lacrosse Ron Hebert.

Blackstock offered similar encouragement to all the signees before leaving the stage.

“I would like to congratulate not just our football players but all of our student-athletes,” Blackstock said. “As coach Bell said, celebrate today, enjoy it, but I say celebrate it as a checkpoint not a final destination. Too often that table becomes the final destination. You’ve been through a lot of ups and downs, seniors especially…I try to look at things from a different lens that I think its prepared you better than any senior class we’ve seen.”

Twelve LOHS athletes commit to playing at collegiate level added by mmkelley on February 10, 2021
View all posts by mmkelley →