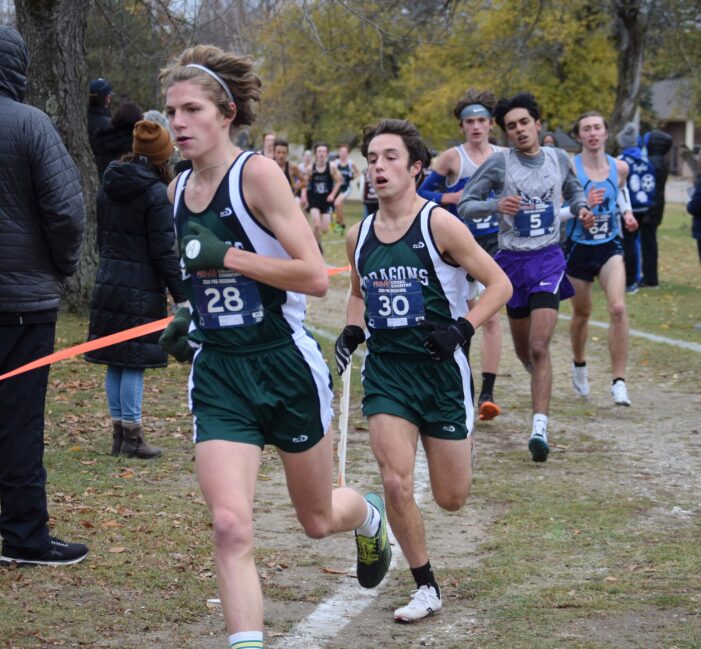 With the third-place finish the Dragons now move on as a team to the Division 1 state finals this Friday at the Michigan International Speedway.

Lake Orion finished the 5,000-meter regional race with a score of 87. Highland-Milford had the top team score at 54 and Rochester Adams came in second at 78.

Last year, Laurent was the sixth-place runner for the Dragons, with four of those ahead of Laurent returning this season. So, it was somewhat of surprise to see how much Laurent had improved in the off season.

“In that sense it’s a surprise, but in another sense he’s one that I would see out running all summer long. So, I knew he was in good shape and was going to give it his best shot. How fast was he going to get? I don’t think anyone could really tell.”

As it has all season, the Dragon’s depth helped the team rack up points toward the strong finish, with all six runners breaking the 17-minute mark.

This was the third time this season that the Dragons have run on the Clintonwood course – first against Clarkston in a dual meet and then in the pre-regional meet the week before, where Lake Orion came in second.

“They all ran their personal bests there (at the regional meet). So, we ran very well,” coach Stan Ford said. “A lot of other teams ran their best there, too, but shoot, if you didn’t you were in trouble. It was just a very tough race, a lot of good competition.”

The Dragons have a relatively young team, with several juniors and sophomores returning next season.

With 27 teams competing at the state meet, Ford said one of the goals this season was to try to get the team to the state meet so that the boys could have that high-level competition experience.

“We’re taking from the standpoint that we want to gain that experience, we want to run hard,” Ford said. “We wanted to get there so they could have the experience and as seniors run very well there.”

Lake Orion is ranked 17th out of the 27 teams that will be competing, though Farmington, for instance, is ranked higher but the Dragons defeated them in the regular season.

“Our goal then would be to be better than 17th,” said Ford, chuckling, who takes a cautious outlook and doesn’t want to oversell their chances.

Because of the COVID-19 pandemic, the state is also adjusting the format of the races.

The first and second place teams from each region in Division 1 will run at 10 a.m. against each other.

Lake Orion and the other third place teams, and the top seven runners from each region who qualified as individuals – their times were good enough to qualify for the state meet even though their teams did not make the meet – will compete at 9:30 a.m.

The top finishers will be determined by time, so Lake Orion will not know exactly where their times fall until after both races.

Ford said without running against the top teams, the Dragons will have to make sure to push themselves.

For Laurent, who has a shot at placing among the top runners in the state meet, Ford said he will have to stay focused even without running directly against some of the best runners.

“I hope that he doesn’t get into what we call no man’s land and there’s no one right behind him and no one right in front of him and he’s just running,” Ford said. “Normally, in a state meet that would never occur because there’s so many people.

“I’m just glad that they have a chance to run on the MIS course because it can be very fast,” Ford said.