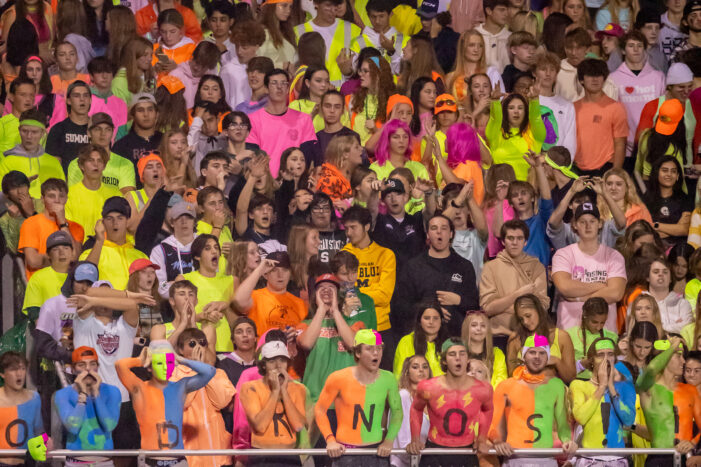 Lake Orion and Clarkston put on a show during the first half during last Friday’s football game, as the two rivals proved why records need to be put aside when they meet.

The Wolves, however, stretched a hard-fought seven-point lead at the break into a 28-point cushion in the third quarter and eventually routed the Dragons, 50-22.

The Wolves balanced attack featured 337 rushing yards and 245 passing yards. Lake Orion finished with 292 total yards – 150 through the air and 142 on the ground.

“I’m happy with how we competed in the first half,” said head coach John Blackstock. “We knew what their tendencies were and they didn’t do anything we didn’t expect. The third quarter just kind of got away from us.”

Lake Orion spotted Clarkston a 14-0 lead in the first quarter, with the Wolves capping 80- and 46-yard drives with touchdown passes, including an 18-yard score on fourth and 12.

The Dragons clawed back into the game, however, mounting their own long drive covering 73 yards and capped by Jack Wellman’s 24-yard touchdown run, to cut the Wolves’ lead to 14-6 (extra point no good) early in the second quarter.

Lake Orion’s special teams came up with the next big play, blocking a Clarkston punt on their next possession and recovered by Wellman at the Wolves’ 33-yard line. The Dragons offense stalled, but kicker Jacob Lee gave Lake Orion three points with a 25-yard field goal, making the score 14-9.

After another Clarkston punt, Lake Orion moved the ball into Wolves territory, but Lee missed a long field goal. The Dragon special teams unit came up big again, taking advantage of a bad Clarkston punt snap, with the ball returned by Eric Pea for a Lake Orion touchdown. The two-point conversion was missed, but the Dragons had the lead for the first time, 15-14.

“It was nice to see our special teams, particularly the play of our punt return unit, pay off for us, because we take that part of the game seriously,” Blackstock said. “We spend a lot of time preparing them.”

Unfortunately, the Dragon defense’s struggles before halftime this season appeared again. Taking over near midfield with only 1:07 left, the Wolves ran eight plays and scored on a short touchdown pass with five seconds left to go back on top at the break, 22-15 (two-point conversion good).

Clarkston wasted little time to stretch their lead in the third quarter. After forcing a Lake Orion punt on the opening second half drive, the Wolves took only three plays to cover 70 yards, including a 42-yard run to the end zone, to go up 29-15. A few minutes later, they added another touchdown on a 46-yard run to go up 36-15.

The Dragons then mounted their own long drive, covering 73 yards in 13 plays, but they failed to score – turning the ball over on downs at the Wolves’ four-yard line.

“We blew some coverages, missed a few tackles and Clarkston made some big plays (in the third quarter),” Blackstock said. “We missed a few opportunities on offense that did not help.”

Clarkston’s big play offense continued to make plays in the fourth quarter. A 54-yard touchdown run stretched the Wolves’ lead to 43-15. Lake Orion got on the second-half scoreboard late in the game with a 60-yard drive, finished by a four-yard scamper by quarterback Kyler Carson. The Wolves, however, finished the rout on their terms, scoring two plays later on a 77-yard touchdown pass.

Despite the loss, Blackstock noted the strong play of Wellman, who carried the ball six times for 53 yards and a touchdown, plus caught a pass for 15 yards. Receiver C.J. Witt caught six passes for 59 yards, while Dorian Hill caught four balls for 45 yards. Carson finished 16-30 in passing, plus scored a rushing touchdown.

The Dragons finish their home schedule this week with a Homecoming matchup against Birmingham Seaholm, which upset North Farmington last week.

“Seaholm is a very physical team,” Blackstock said. “They play smash mouth football and like to control the ball to keep your offense off the field.”

The head coach said he expects the Dragons to rally and compete against the Maples.

“We’re going to go out and be the best team we can be these last two weeks, so we can send our seniors off on a high note,” Blackstock said. “For our younger guys, we just want them to continue to improve and use these last couple of games as a springboard to next season.”

Second-half surge propels Clarkston over Lake Orion in football action added by mmkelley on October 13, 2021
View all posts by mmkelley →