Raiders slay the Dragons in a lopsided LO football loss 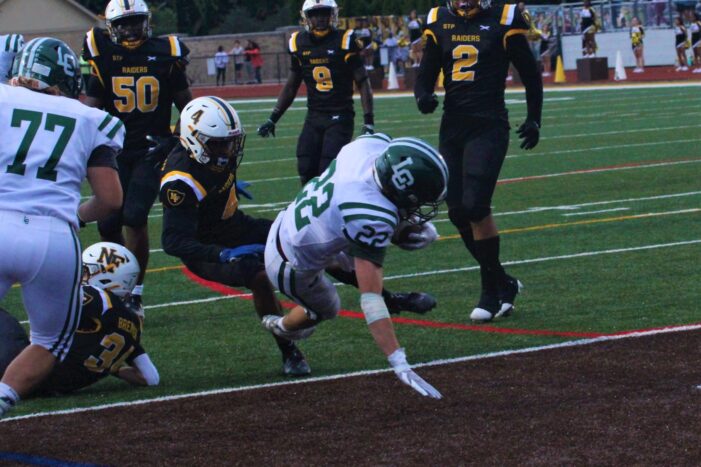 It had been a long time since Lake Orion’s football team was on the losing end of a running clock, but North Farmington’s drubbing of the Dragons last Friday, 44-22, featured just that.

The Raider offense fired on all cylinders, opening up a 38-point lead early in the third quarter, which triggered the mercy rule.

With the game well out of hand and back-up players on the field, the Dragons did score twice late in the game, plus a safety, to make the score tighter, but that provided little solace.

Head Coach John Blackstock said the Dragons (1-1, 0-0 OAA Red) were beaten in every phase of the game – offense, defense and special teams.

North Farmington only outgained Lake Orion by 29 yards, 336-307, but they completed 5-9 third down attempts, including a few for big gains and scores. The Dragons, meanwhile, only converted 2 of 10 third downs and lost two fumbles.

“They made big plays when they had to, especially on third down, and we didn’t,” the coach said. “We also missed blocks, tackles and assignments that cost us.”

The Raiders jumped ahead early, 7-0, on the first drive of the game, capped by a 25-yard touchdown pass that was the only score of the first quarter.

North Farmington added a second score on a short run early in the second quarter to go up 14-0, but Lake Orion got back in the game on a seven-yard touchdown run by receiver C.J. Witt minutes later, cutting the deficit to 14-6 (extra point missed).

With the game’s momentum seemingly shifting, the Dragons forced the Raiders into a third-and-long situation near mid-field on their next possession. North Farmington, however, responded with a 56-yard touchdown run that deflated any Lake Orion momentum.

“That really hurt,” Blackstock said. “We were in the position to make a tackle, but we didn’t. That was the turning point in the game.”

North Farmington moved the ball at will on their next possessions and added two more touchdowns in the second quarter to turn the game into a rout at halftime, 34-6.

“When you watch the film, it wasn’t a matter of our whole team playing bad the entire game, but everyone seemed to make mistakes at different times that really hurt us,” Blackstock said.

The Raiders did not let up in the third quarter, padding their lead by 10 points and starting the running clock.

Backup quarterback Connor McCartan and other substitute players made the most of reserve time in the fourth quarter. He threw an 11-yard touchdown pass to receiver Joey DeBrincat with about five minutes to go, to make the score 44-13.

After the Raiders decided to give up a safety rather than punt out of their end zone on the next series, the Dragons capped the scoring on McCartan’s one-yard plunge with 30 seconds left in the game.

While there were few positives to take from the team’s performance, Blackstock said junior defensive lineman Judah Kinne had a solid game with five tackles. He also appreciated the positive leadership from seniors Kyler Carson, Stephen Brown and Nasir Lardell in the lopsided loss.

“It really doesn’t matter when you lose a game like this, whether it is early or later in the season,” Blackstock said. “But how do you learn from it and use it in the coming weeks? Do we correct the mistakes, or continue to make them?

“I would like to think we’re going to come back with more focus and attention to detail, which seemed to be lacking. This will be an important week of practice.”

Lake Orion’s trek through the OAA does not get any easier this Friday, with the Dragons traveling to Southfield A&T, which is 1-1 on the season. Last week, the Warriors handily beat Birmingham Groves, 33-7.

Blackstock said all of their skilled players are very athletic, led by their sophomore quarterback who is already getting college scholarship offers. He also noted both their offensive and defensive lines play hard and physical.

“We’ve beaten them the past couple of years, so they will be gunning for us,” he said. “We’re facing a confident group. It’s time to get back on the horse and go at it.”

Raiders slay the Dragons in a lopsided LO football loss added by mmkelley on September 8, 2021
View all posts by mmkelley →