Prochaska family ascends to the top of North America 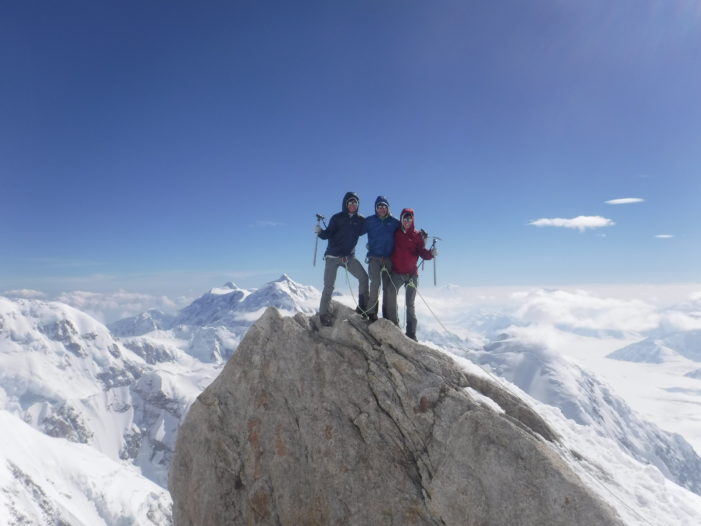 By Zach and Ian Prochaska

A special to The Review

For most of us, the Fourth of July is spent out in the warm sun, with meat on the grill, fireworks in the air, and fun in the water. For Wayne Prochaska and twin sons Zachary and Ian, the day was spent in the sub-zero temperatures of central Alaska. For them, the nation’s birthday was the culmination of an expedition to the summit of Denali. At 20,310 feet, Denali (formerly Mt. McKinley) is not only the highest point in the United States, but also North America.

Such an undertaking does not just happen. “The three of us have been planning this trip for nearly 10 years,” says Zach.

In 2009, the Prochaskas climbed Mount Rainier in Washington state. While not incredibly high altitude (14,410 feet), the heavily glaciated mountain is an excellent training ground for those looking for an introduction to mountaineering. With the guidance of Washington-based Rainier Mountaineering Inc. (RMI), they reached the crater-rim summit via the standard Disappointment Cleaver route in gusts of wind greater than 60 miles per hour.

The three returned to Rainier the following year, this time with the intent of expanding their mountaineering knowledge on an expedition skills seminar, again with RMI. Over the course of a four day climb they again reached the summit, this time via the less-traveled Kautz route. Named after the Kautz glacier, the crux of the route is a steep ice chute that climbers must ascend to reach the upper parts of the mountain. Along the way, they gained valuable skills such as shoveling out a safe camp site, crevasse rescue, and use of a mechanical ascender. All skills required on Denali.

“The expedition skills seminar on the Kautz route went really well, and it was after that when we started taking a serious look at climbing Denali,” said Ian.

However, there was one problem: school.

Ian and Zach, 2009 graduates of Lake Orion High School, had just completed their freshman year at the University of Michigan, and the twins agreed that their focus needed to be on academics rather than mountaineering.

As strong as the desire was to try and tackle Denali’s challenge, the dream was pushed back indefinitely.

Between undergraduate studies at the University of Michigan, medical training at the Lincoln Memorial University – DeBusk College of Osteopathic Medical Physician Assistant Program and starting their careers in emergency medicine, it would be seven years before they would climb again.

“It had been such a long time since we had climbed anything,” says Zach. “We knew it was time to get back into it.”

Knowing that aiming immediately for Denali would be foolish, they plotted out a multi-year plan that would gradually prepare them for the challenges they would face. First, a trip to Kilimanjaro. While not requiring crampons or an ice axe, the highest point in Africa (19,341 feet) was an excellent exposure to higher altitudes.

The following year they planned to climb Mount Elbrus in Russia, but the mounting tensions between the United States and Russia changed that.

“We were actually at a planning dinner for the trip, and we received an email saying it had been cancelled,” says Ian. “Suddenly we were left scrambling.”

The plan was to climb Denali the following year, and now the Prochaskas needed a backup plan. After evaluating their options, they signed up for a trip to Ecuador, where they would climb on the three highest peaks in the country.

“Ecuador was an unforgettable adventure, and it turned out to be excellent preparation. We were incredibly fortunate to be able to go on such an awesome trip on such short notice,” says Wayne.

Finally, it was time for Denali. For the next six months they would do their best to plan every detail from gear lists to what food they would bring. On June 18th, their expedition began by flying onto the Kahiltna glacier.

Over the next two weeks, their RMI-led party would gradually ascend the Kahiltna glacier and the mountain, establishing a total of five camps where they would cache gear and adjust to the altitude.

“Moving gradually on the mountain is very important,” says Zach. “If you move too quickly, especially with our heavy loads, you can easily get into trouble.” All together, they estimate their total gear load at 130 pounds per person.

The weather, which had been perfect during the initial stages of the expedition, turned once they reached their highest camp at 17,200 feet. There they would wait for nearly a week, confined to their tent in sub-zero temperatures, for a window of weather to go for the summit.

On July 4, 17 days into the expedition, the day arrived. At approximately 4:30pm, after hours of climbing, they stood on the highest point in North America. Three days later they would return to base camp and fly back to Talkeetna, returning to civilization after nearly three weeks on the mountain.

“We call him a moose, because he just puts his head down and keeps going, no matter what’s in front of him,” says Zach. “It’s a major accomplishment to summit Denali at his age, but he doesn’t care about that.”

Says Wayne, “I was just happy to be able to spend three weeks with my kids. Not a lot of parents get the chance to do that.”

For the twins, the summit of Denali is a major step toward their lifetime goal of climbing the Seven Summits (the highest point on each continent), as well as running the six World Marathon Majors. The next adventure is already in the works.

Prochaska family ascends to the top of North America added by mmkelley on August 14, 2019
View all posts by mmkelley →