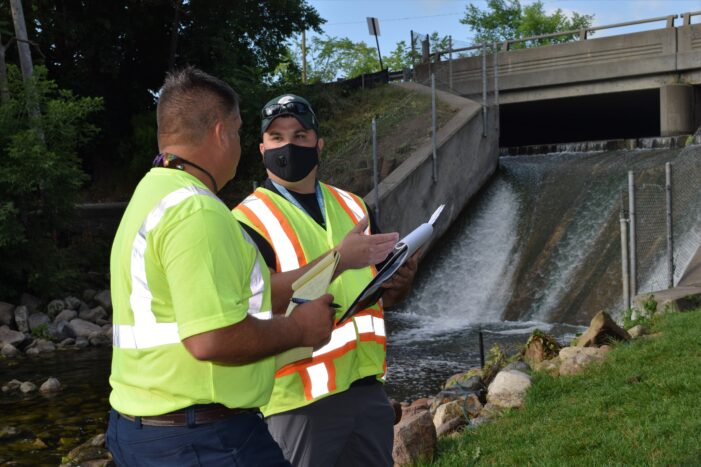 There are a few minor surface cracks to patch and some vegetation to clear away from the dam structure, but overall the Paint Creek dam is in pretty good shape.

Which is a relief to the Village of Lake Orion.

Lucas Trumble, a dam safety engineer with the Hydrologic Studies and Dam Safety Unit for the Michigan Department of Environment, Great Lakes & Energy (EGLE), inspected the dam on July 23.

The last inspection report on the dam was in 2016. Dams, such as the one in Lake Orion, have to undergo a safety inspection every four years. The Village of Lake Orion could have paid to have an engineering company come out and inspect the dam, or ask EGLE to do it for free, said village Manager Joe Young.

The inspection, required under the dam safety statute, included looking at the condition of the dam, the embankments, the roadway, the guardrails leading up to the dam, the drawdown station and blocks and the structure as a whole.

The Paint Creek dam is “classified as a significant hazard potential dam. And it’s required to be inspected by an engineer every four years as part of owning a dam that’s regulated by the state,” Trumble said.

“It’s not an indication of the condition of the dam or the likelihood of failure; it’s just the potential that exists for downstream impact should the dam fail.”

The dam – located under the M-24 overpass just north of where Broadway Street/M-24 intersect – controls the flow of water from Lake Orion into Paint Creek.

“This dam is actually in fairly good condition. There’s some ongoing minor maintenance issues, which is typical for most dams,” Trumble said. “Trees and brush like to grow on the embankments and we always recommend that those are removed. There was some surface deterioration on some of the concrete faces, especially with the drawdown structure.”

Trumble also noted that there were not any major, or “critical” issues that needed to be addressed.

“But all the structures, the embankment, the roadway, everything appeared to be fairly stable,” Trumble said. “Beyond those maintenance items and some future concrete repair, there won’t be any major recommendations from this inspection.

In 2017, the dam needed to undergo immediate assessment and repairs to fix a depression (a “sinkhole”) below the spillway that allowed water to flow from Lake Orion into the creek unchecked.

The DNR discovered the problem during an inspection on Aug. 11, 2017 and the village immediately contacted MDOT and Oakland County to begin monitoring to make sure the water levels had not changed

The public was not in any danger at the time, nor was the dam in immediate danger of failing or Paint Creek of flooding, said village and state officials.

Work crews installed a temporary cofferdam into Lake Orion to prevent water from flowing over the dam, which allowed for a complete structural assessment and repairs.

The Michigan Department of Transportation, which owns the bridge over the dam and co-owns the dam with the village, paid for $670,000 in repairs in 2017 and half of the $69,270 engineering costs, with the village paying only $34,635.

Trumble said he will generate a report on the inspection and submit it to the village and the local emergency manager in Oakland County.