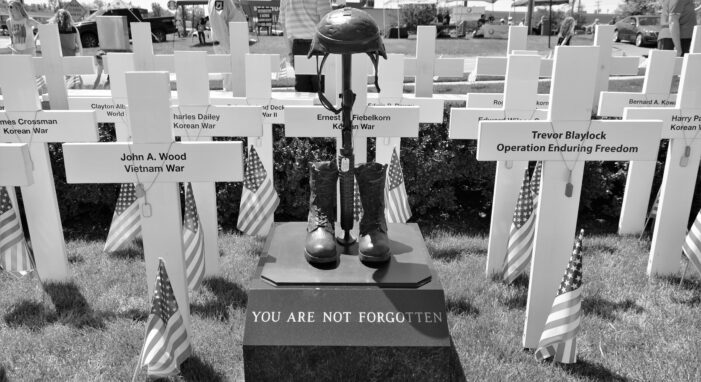 There will be a Memorial Day ceremony at the Orion Veterans Memorial on May 25. However, because of the COVID-19 pandemic, it will be different than in years past.

Viewers will have to watch the ceremony in the comfort of their homes instead of in person. The ceremony begins at 1 p.m. and will be shown on ONTV Channel 10 on Comcast or channel 99 on U-verse. It will also be shown on Charter Cable in Oxford.

The Memorial Day ceremony is also available on orionveteransmemorail.com.

“There will be full ceremony honoring our veterans, especially those who lost their lives in service to our country. The names of the men from Lake Orion who died in the Civil War, World War I, World War II, the Korean Conflict, the Viet Nam War and in current wars will be read aloud and (a) bell tolled for each of them,” said JoAnn Van Tassel of Post 334 Auxiliary.

Vito Pamplona, a veteran of the Korean Conflict, will give the keynote address.

In addition to his military service, Pamplona has also been active in his community helping those in need. He is the author of Real Americans, under the pen name Vito Anthony, about how he helped his daughter, who works for Homeland Security, expose and stop a terrorist group in the greater Detroit area.

Ruby Howe, a 12-year-old from Oxford, is the Veterans of Foreign Wars National Essay winner. She will read her winning essay about her grandmother’s quilt and how the colors and patterns in it remind her of the diversity of America.

“She ties her message into the founding of the United States and how people came here for religious and economic freedom. Ruby adds the original motto of the United States – E Pluribus Unum – One from Many – in completing her essay. You don’t want to miss this,” Van Tassel said.

The Keynote Sisters, Phoebe and Jaclyn Holmes, two sisters from Lake Orion, will lead the attendees in singing the National Anthem and God Bless America.

“They currently are blessing shut ins with their music by driving up in their van and putting on a concert to help cheer them up while they’re staying at home during the Covid-19 pandemic,” Van Tassel said.

Memorial Day ceremony to be broadcast live added by mmkelley on May 20, 2020
View all posts by mmkelley →