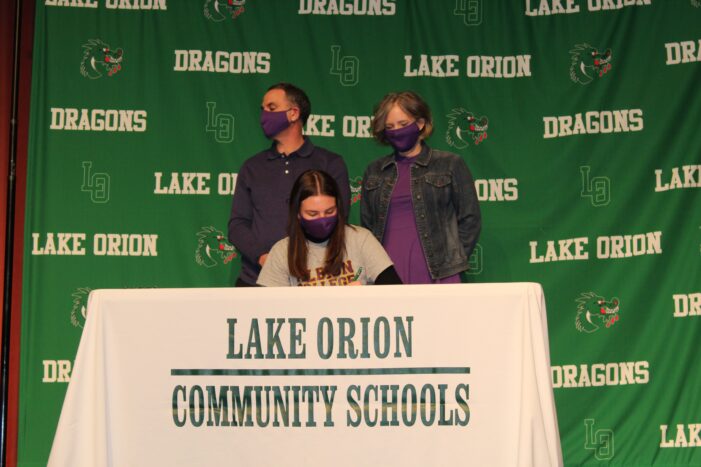 After a challenging year for high school athletics, Lake Orion High School held their final athlete signing day of the year on April 28 where 17 student-athletes signed letters of intent to play college athletics.

“We’ve had a very successful year when we look at the number of kids that we had that have signed to go to school and continue their athletic careers at the college level,” said Chris Bell, Athletic Director at LOHS. “We’re very proud of that. It says a lot about the hard work that our student-athletes put in. It says a lot about our coaches and the time and efforts that they’ve put in and programs that we have.”

“College athletics is a great opportunity. If you think about the thousands upon thousands of student-athletes in the state of Michigan, there’s an elite few that go on to play that the college level. There’s an elite few that have the desire, the talent and that opportunity so it’s a great opportunity,” Bell said. “I will tell you, athletes, playing college athletes is a life-changing and life-enhancing opportunity. It will force you to get out of your comfort zone. It will push you in ways that you didn’t think you could be pushed. It’s going to challenge you. But I tell you, if you go and you see it through and you step up to that challenge as your athletic careers have taught you most of your life it will become a way of life for you. And the opportunities, the doors will open; the friendships you’ll make, the memories you’ll have, the great times that you will have.”

Kicking it off with a first for LOHS, Michael Pavelich signed his letter of intent to join the bass fishing team at Tiffin University where he plans to study homeland security and anti-terrorism.

Head coach of the LOHS football team, John Blackstock took the podium to introduce his athletes.

Brock Iwanski, a linebacker for LOHS, signed to play football at Carthage College where he plans to study business with an emphasis in marketing.

TK Fikes, defensive back for Lake Orion, signed his letter of intent to play football at Heidelberg University.

Two football athletes were unable to attend the signing, Don Bruno who also signed to Heidleberg University, and Ben Tarkayni who signed to Lawrence Technological University.

Luke Aguillar, a pitcher for LOHS, signed his letter of intent to play baseball at Rochester College.

Griffin Firestien, another one of Lake Orion’s pitchers, signed to Adrain College.

Sammy Foesmon, a pitcher for Lake Orion, also signed a letter of intent to Adrian College.

Rounding out the baseball signees was outfielder and all-state wrestler at LOHS, Dom Orselli who committed to play baseball at Albion College.

Up next, golfer Marissa Kovac was introduced by LOHS golfing coach Monty Gallaher. Kovac signed her letter of intent to play golf for Kalamazoo College.

Natalie Maki signed to Kalamazoo College where she plans to major in pre-law with a focus on environmental studies.

Sydney Myszenski also committed to Kalamazoo College where she plans to major in biology and pre-med.

Julia Ames signed to play lacrosse at Albion College where she plans to study business.

Boys and girls varsity soccer coach Chris Corteg introduced two seniors, one from each of the teams he has coached this year.

Sarai Latshaw signed her letter of intent to play soccer at Bob Jones University where she plans to major in health sciences.

Michael Bogar signed to play in one of the top college soccer programs in the country, Davenport University where he hopes to take the team to a national championship and plans to study business and sports management.

Each athlete signed their letters as their coaches introduced them and highlighted their individual accomplishments.

Athletes were reminded that even after they move forward in their lives, they still have a strong support system in the Dragon family.

“Know that we here at Lake Orion High School will remain your biggest fans. We’ll follow you, we’re proud of you,” Bell said.

LOHS student-athletes sign college letters of intent added by mmkelley on May 12, 2021
View all posts by mmkelley →