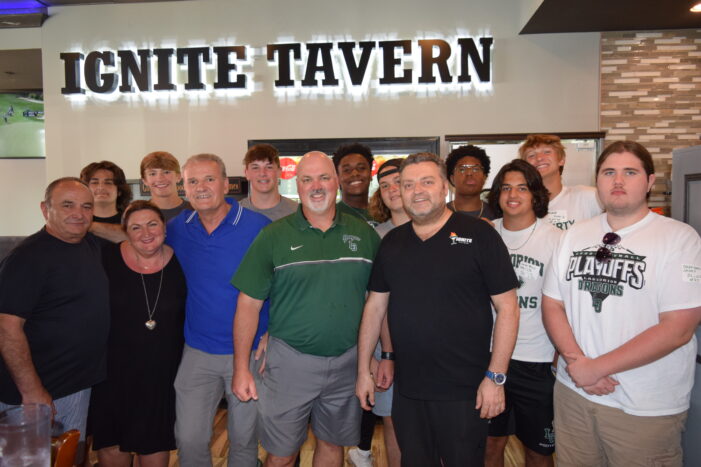 The Lake Orion High School varsity football players are doing their part to ignite the football spark in the Orion community, going to Ignite Tavern on Saturday for a meet-and-greet evening.

Guests at Ignite Tavern on Baldwin Road got to meet the players and talk about the upcoming season while enjoying dinner.

The meet-and-greet, arranged by the football booster parents, was also a dine-to-donate fundraiser for the program.

Ignite Tavern owners Pashko Gjonaj and Nrek Gjolaj support the team and were glad to have the Dragons in-house for the fundraiser, with a portion of food sales benefiting the LOHS football program.

“This is the best thing. I don’t mind doing anything for them,” Gjonaj said, adding that Ignite Tavern is a “corner family restaurant” with staff from Lake Orion. “The (football) families and players come in all the time. We love it. We support them.”

Head Coach John Blackstock said that while it is important to get the team out into the public to raise funds for the football boosters and football program, it is just as important to make sure they are giving back to the community.

“Number one, to try to raise some funds to help supplement the program, to do some little extra things for the guys during the season. But we also felt it was important to try to include them in getting out into the community, meeting people and trying to drum up a little support so that the community gets to know them,” Blackstock said.

“I also think it’s good for these guys just to get out and talk to other people. I think it’s a good life skill for them to be proactive, to reach out to their community and understand that they are a part of the community and to get support they have to do a great job in the community, being upstanding citizens and role models for the kids in our community,” Blackstock said.

The players have been open to getting out in the Lake Orion community and the coach said that the team wants to do more down the road.

“They’ve been really open to it and we’re looking for other ways to get involved and give back and do some community service as well,” Blackstock said.

While training for the football season doesn’t officially begin until Aug. 9, in June the Dragons will have a three-day mini-camp and then another three-day camp at the end of July.

“We call it an install camp where we’ll start installing offense and defense schemes, start teaching some of the techniques and fundamentals to get a little jump start on the season,” Blackstock said. “A lot of schools that we play have a football class that they do in the fourth quarter (of the school year). We don’t have that class, so it’s a way for us to catch back up and get on par with those guys.

“It’s great team bonding and a good opportunity for them and (the coaches) to see, ‘Hey, this is the new team.’ Other than some off-season training, it’s really the first time that they’re back together,” the coach said.

Both the players and the coaches are looking forward to the upcoming season and trying to emulate the program’s previous success. In 2020, the Dragons went 3-3 in the COVID shortened season and made the playoffs. In 2019, Lake Orion finished 9-2, losing the district championship to Utica Eisenhower.

“I think there’s a lot of excitement. It’s a really good group of kids and they’re going to be a lot of fun to coach. I think in our league it’s always really hard to predict a record because it really is such a top-notch league, but I’m really excited about the character, the work ethic, the leadership and just the togetherness of the guys that we have coming back.

“I hope we get a lot of fans in the stands on Friday nights because it’s truly an event. Football is obviously very important to us, but there is a lot of other stuff going on with our band and our cheer team and dance team. And even the robotics team out there shooting their t-shirt cannon. It’s become a real event on a Friday night,” Blackstock said.

“I think there’s a lot of energy, too, coming out of COVID and being able to be with people in a group setting,” said freshmen football coach Dan Dabrowski. “I think Friday nights, people are looking forward to that now. Just getting back out and getting back to that normalcy of coming out on a Friday night with the family and enjoying a football game.”

LOHS football team sparks community support during a meet-and-greet at Ignite Tavern on Sunday added by mmkelley on June 9, 2021
View all posts by mmkelley →