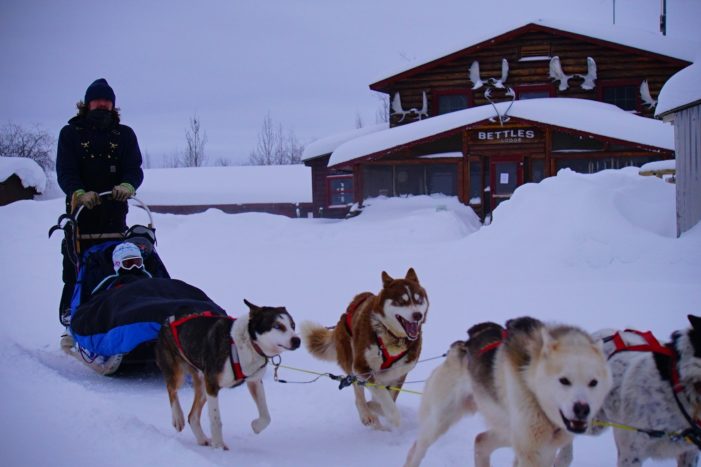 Tye did what most teens do once graduating from high school; he started taking classes at Oakland Community College.

In the summer of 2015, he packed up his stuff and headed for Yellowstone National Park to do seasonal work. This was his first experience with seasonal work and it would stick with him for the next several years.

When he returned to Michigan he attended OCC for another two years and from there went on to study geology at Wayne State University, graduating in August of 2019.

While at Wayne State, in order to graduate, Krukowski traveled to Italy where he participated in a five-week intensive field course.

“Wayne State didn’t offer (the course) so I got to choose where I wanted to go. So I picked George Mason University because they did their’s over in Italy,” Krukowski said.

After his time in Italy doing his field course work, his TA (teacher’s assistant), who had just finished her PhD, invited him to hike around France and back to Italy, where they hiked the GR20 on an island off the west coast of Italy called Corsica.

Krukowski spent two weeks hiking the famous Corsica GR20 before he returned home toward the end of the summer in 2019.

“I obviously accumulated a little bit of student debt and I read a book called Walden on Wheels by Ken Ilgunas and I read this about two and a half years ago,” Krukowski said.

“It’s about a guy, he accumulated a bunch of student debt and he wanted to pay it off as fast as he could so he ended up finding a seasonal job up here in Alaska…so he worked and he paid off his student debt in like two years because he didn’t have any living expenses up here and just kind of worked his butt off. So that kind of gave me the idea. It planted the seed of Alaska and getting rid of my debt.”

Keeping this in mind, after graduation Krukowski started looking for a job in his field.

“Filling out my resume and filling out applications just got really, really depressing and I didn’t really have a direction of where I wanted to go,” Krukowski said.

“I couldn’t sleep one night and I was scrolling through a website called coolworks.com, which is where you can find a lot of the seasonal work, and I came across dog mushing in Alaska. I was like, ‘Oh, that’d be neat’ and I was super motivated that night, so I emailed the lodge that I’m currently working for (Bettles Lodge)…and ten minutes later they emailed me back and they were really interested and so we got into an open dialogue and they were kind of just explaining to me that it’s a remote village, there’s no social life, there’s very limited internet, your phones won’t work, they only have three channels of T.V., it’s really cold and they’re listing all these negatives and for some reason, to me, it sounded like a whole lot of fun.”

While Krukowski was interested, he was still unsure because this was something he had never done before.

“They ended up giving the job to someone else. That’s when I knew that I really wanted it — when I didn’t end up getting it,” Krukowski said.

However, as luck would have it, the person who had been originally offered the position, ended up backing out and Krukowski was offered the job two days later, which he happily accepted.

Two weeks later, he was on a flight to Alaska.

Bettles, Alaska is a tiny town that is shared with a native corporation called Evansville. Krukowski estimates that it has a population of around 26 people.

Bettles itself is 35 miles north of the Arctic Circle and is not on the road system. In fact, in order to get to this area, you can only fly into their commercial airstrip (which used to be an air force base back during World War II) in the summertime, or drive in through an ice road that is only open for about four weeks out of the year, Krukowski explained.

Bettles Lodge (the lodge Krukowski works for) specializes in northern lights viewings in the wintertime.

“A lot of people come up here because this is one of the best spots in Alaska to see the northern lights because of how far north we are,” Krukowski said. “As long as the skies are clear with no clouds, the Aurora is usually right overhead every single night. It’s a pretty beautiful sight.”

In the summertime the lodge does national park tours. Because Bettles is so close to several National Parks, Gates of the Arctic National Park and Preserve and Kobuk Valley National Park, they are able to fly visitors into these parks for them to explore.

Krukowski’s tasks in the winter include taking care of the 18 sled dogs, which includes giving dog tours on the trails.

He is also responsible for grooming and maintaining trails.

“Once you’re out there, you’re out there. There’s really nothing around here and that’s kind of the beauty of it,” Krukowski said. “You’re completely in the middle of nowhere, so once you’re 20 minutes down a trail you’re actually in the middle of nowhere and there’s no one around, animals are spread out very sparse because there’s so much untouched land and it’s a super cool feeling.”

In his time at the lodge, Kruskowski has spent countless hours with the lodge’s dogs and has formed a bond with them in a way that he says is unlike anything he’s experienced before.

“The dogs really really love what they do, and like as soon as you start hooking them up to the line they’re just like barking and trying to pull the sled and jumping up and down and just ready to go,” Krukowski said. “The connection that we do have is just something I’ve never really experienced before because the trust that the dogs have in me and the trust I have in the dogs — it’s just a crazy thing to have that type of connection with an animal…and they’re awesome. I can’t talk about the job and not mention the pups.”

While this isn’t Krukowski’s first adventure, it certainly is not something he had ever envisioned himself doing.

“If you had told me six months ago that I’d be doing anything like this I would have told you you were crazy,” Krukowski said. “Especially how far north I am in Alaska and just kind of living in the middle of nowhere. It was just a really unexpected thing.”

Not only is this an exciting adventure for Krukowski, but like he read in Walden on Wheels, it is also an opportunity to pay-off his student debt.

Seasonal work allows people to save money rather quickly because they rarely have cost-of-living expenses, Krukowski explained. Paying off student debt doesn’t necessarily have to be a daunting task that it’s often made out to be.

“Paying off college debt can be fun,” Krukowski said. “It’s really easy to do and there is tons of seasonal work out there and there’s seasonal work for everybody.”

While Krukowski’s current position may seem difficult to reach and even maybe a little far-fetched, he offers some very simple but important advice to anyone thinking this is something they might want to do.

“Ignore the feeling of fear, because no matter what you do out of your comfort zone, fear is going to arise and it’s just kind of a safety mechanism your brain has,” Krukowski said. “Whenever you throw yourself into something that you’ve never done before, if you’re fully focused on what you’re doing and just ready to give it your all, most of the time everything is going to be just fine and whatever you were worried about prior to that doesn’t even really matter anymore. I think that a lot of people can learn to do things a lot faster than you think. With enough patience, you can overcome any of the challenges you face and it’s probably one of the most satisfying feelings I’ve felt in my young life. I’ve always wanted to tell people not to limit yourself because we’re capable of way more than what we tell ourselves.”

LOHS alumni proves that paying off student debt doesn’t have to be a drag added by mmkelley on March 25, 2020
View all posts by mmkelley →