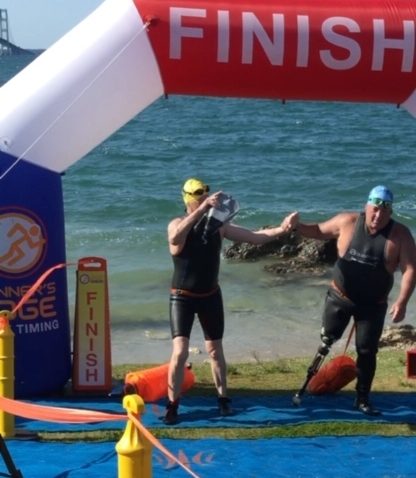 Ah, the majestic Straits of Mackinac, home to some of Michigan’s greatest beauty, is the body of water that connects Lake Michigan and Lake Huron.

Though named separately, this connecting body of water technically creates the largest lake (by surface area) in the world, according to the National Oceanic and Atmospheric Administration.

The frigid water temperatures (usually ranging from the mid-50s to mid-60s) and strong currents provide a challenge for adventurers and daredevils alike.

Each year, the Mighty Mac Swim offers up the opportunity for such people to make their attempt at swimming the Straits of Mackinac.

For LOHS alumni Mike Henry, this nearly 4.04-mile swim presented a new challenge he was excited to take on.

The self-proclaimed “daredevil” is not new to these kinds of adventures.

After losing his leg in a snowmobile accident in 1981, Henry didn’t let that hold him back.

Before he graduated from LOHS in 1987, he was a part of both the ski team and the golf team. His senior year he was the captain of both teams.

“I wasn’t the best skier or golfer but I was certainly the most motivational,” Henry said.

For Henry, who is always looking for new ways to push himself, the Mighty Mac Swim presented another challenge for him to overcome.

So on Aug. 11, he put on his wetsuit and prepared for the swim ahead.

The course would begin with a ferry ride out, a 300-yard swim back to shore and a 4-mile swim from the shore to St. Ignace.

Swimmers would also carry with them a buoy where they could store items for the journey.

Henry brought his phone with him to allow family to track his progress throughout the swim.

Henry finished the swim in 3 hours and 11 minutes, just short of his three-hour goal.

“I was the only guy who had to get in the water and take my leg off and then put it on and take it off again while on the clock,” Henry said. With this in mind, he was still proud of his time.

“It was lots of fun. I never questioned why I was doing it,” Henry said. “I do and have always done things that pushed me…that wasn’t the most physically demanding thing I’ve done, I’ll tell you that.”

Henry has a long resume of adventures, including a trek with his family through the jungle in Belize in 90-degree heat.

As for the Mighty Mac Swim, he doesn’t think he will do it again.

“Maybe it will be a bucket list thing,” he joked.