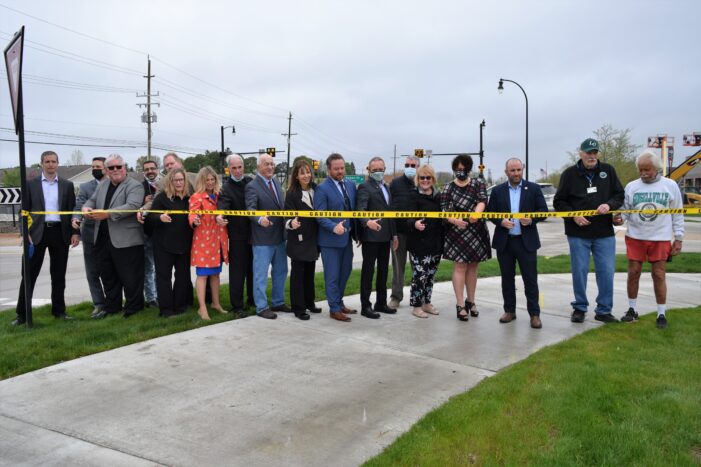 It has been an ongoing project four nearly four years, but the Baldwin Road widening and streetscape project is – officially – finished and open for traffic.

“This project has been a true labor of love, but now that it is complete, we can reflect on the magnitude and importance of this project to our community,” Orion Township Supervisor Chris Barnett said. “Simply put, it’s a game-changer! Our residents and businesses have been extremely patient during this project, but now I am confident that they will reap the benefits of our new state-of-the-art corridor for decades to come. Thank you to the Orion Township Board, the Corridor Improvement Authority, and our residents and businesses for your support to see this vision to completion.

“This is not about me, this is about everyone here…we made it,” Barnett said.

The Baldwin Road widening and streetscape project involved widening about two miles of Baldwin Road between Morgan and Waldon roads, from a two-lane road to five lanes in some areas and a four-lane boulevard in other sections.

The project also included adding five roundabouts – at Maybee, Judah, Waldon and Gregory Roads, and in front of the Great Lakes Athletic Club – as well as landscaping features, new signs and crosswalks and pathways along the roadside.

Construction on the $55 million Baldwin Road project began in 2017 and finished in late fall 2020, with all lanes open to traffic.

The multi-year project was paid for by federal, state and local funds, with more than $5 million in federal road funding, $38 million in Michigan Transportation Economic Development Fund dollars (TEDF) and contributions from Orion Township and the road commission.

Orion Township paid for all the landscaping and pathway costs, according to a news release from the road commission.

“This is one of the most significant projects we have completed in some time,” said RCOC Chair Andrea LaLonde. “This section of Baldwin was very congested, which hurt area businesses and made it difficult for area residents to travel to and from their homes. Now, the traffic flows much better, the road is much safer and it looks much more attractive.”

“I do think we have a new appreciation for infrastructure,” Coulter said, adding that the project would “produce results for decades to come from this great community.”

Barnett thanked the members of the road commission, Oakland County government and the Orion Township Corridor Improvement Authority (CIA) and township employees for their efforts in getting the project started years ago, and seeing it to completion.

Barnett said that it was Jim Stevens, vice president of engineering for OHM Advisors, who “cast a vision” in 2012 and came up with creating a CIA which allowed the township to capture $3 million in extra funds for landscaping and improvements along the Baldwin Road corridor.

“And previous (township) boards were very smart and diligent in setting aside money for this project,” Barnett said.

Local, county leaders officially open Baldwin Road project with ceremony on Tuesday added by mmkelley on May 5, 2021
View all posts by mmkelley →