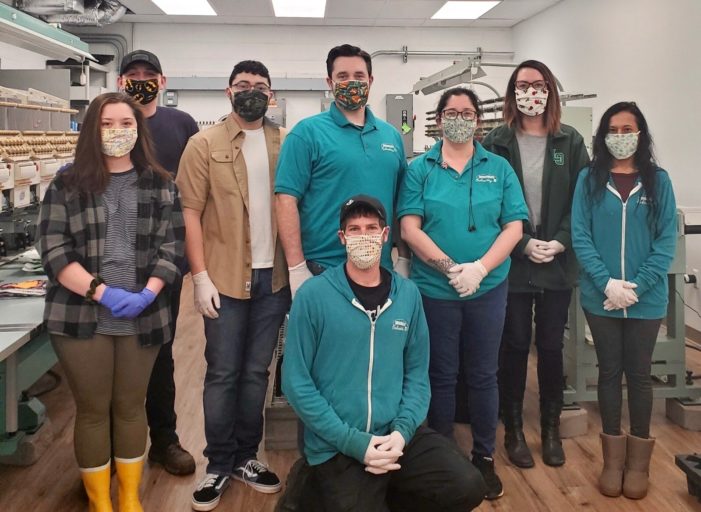 As COVID-19 cases increase throughout the country, the nation faces another obstacle in hospital resources.

With a nationwide shortage of ventilators, gloves and masks, local businesses and residents are taking matters into their own hands by using their own resources to help the doctors and nurses who are battling COVID-19 every day.

Even here, in Lake Orion, retailers and individuals are switching things up to meet the demand for help, especially when it comes to face masks.

Broadway Embroidery in downtown Lake Orion is one of the retailers pulling together their own resources to help with the nationwide shortage.

During the week of March 16, owners of Broadway Embroidery Sally Medina and Olivia Mitteer started to notice embroidery Facebook groups sharing patterns for masks. Soon they began receiving requests for face masks from friends who are nurses.

“As the week went on, we started seeing requests from our personal friends that are nurses saying that they were being asked to re-use their masks and that they had to take them home at the end of the day in a paper bag and they wanted extra protection,” said Medina.

“At first we were just trying to help our friends and then when it got opened up to the community…you just can’t say no when you hear a person’s story,” said Medina. “They’re literally on the front lines and they’re not being armed with what they need in order to protect themselves.”

But it isn’t just nurses who are asking for masks; “essential service” employees such as people who work at CVS, banks and grocery stores as well as senior citizens who just want added protection when they leave their homes, have also reached out for masks.

“It’s been emotional…to hear their stories. We’re doing everything that we can but it’s a lot,” Medina said. “We have been working nonstop for the last seven days now and it’s been pretty crazy.”

With the help of their family and volunteers, Broadway Embroidery has managed to help hundreds of nurses and members of the community.

“So many people want to help and they have,” Medina said. “The other emotional part is not just the stories from the people asking for the masks, it’s the community…people have come in with like an eight inch piece of elastic because they want to help.”

Medina and her family have not only received support through fabric or elastic donations, but have also had other businesses like Jets Pizza and Mannie’s Bagels provide them with food and other treats.

“I’ve always known that we lived in an amazing community but just to see something like this and everybody pull together has just been pretty incredible,” Medina said.

In the beginning, Broadway Embroidery had received a donation of scrubs from a local scrub company and were able to stock up on material rather quickly but ran into a problem with elastic. They have since received shipments, along with donations, to aid in that as well. But as weeks pass, materials dwindle and need to be restocked.

“Crafters all around Lake Orion have elastic and fabric laying around so that was definitely appreciated and we’ve gone through a lot of that, but there’s things like the larger sheets of stabilizers that we need for our machines that we just need to order from an external company,” Medina said.

Medina and her sister, Mitteer, are very strong in their stance to keep making these masks as donations, and not something they are trying to profit off of. However, there is a cost to creating these masks, a cost they are taking on themselves, and requests do not seem to be slowing down.

“We thought that this was going to be a week and that we’d be able to help everyone,” Medina said. “We didn’t realize that every single hospital was going to be having these issues.”

While Medina and her family are focusing on the surrounding community, they have also received requests from New York and Georgia, with about 80 percent of their requests coming from nurses in need. All of these masks are adding another layer of protection against the Coronavirus and hopefully will ultimately lead to more lives being saved.

Donations to Broadway Embroidery can be made via gofundme.com by searching “It Takes a Village – LO/Oxford Mask Donations.”