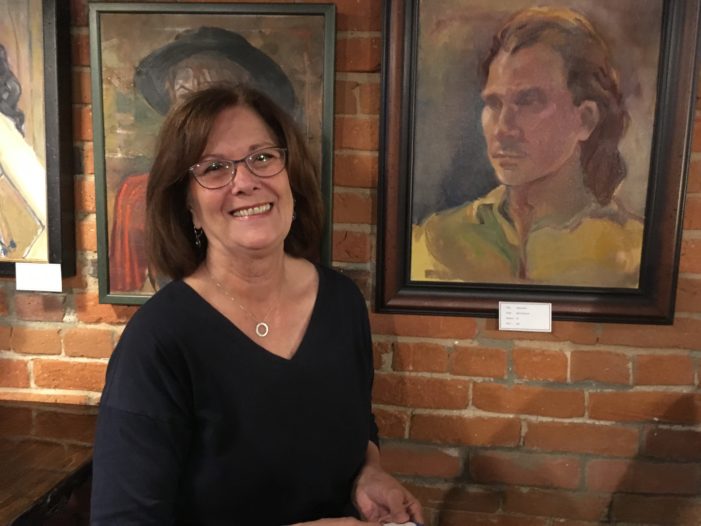 Amy Foster judged the exhibit entries. Foster, a 1994 graduate of the Center for Creative Studies College of Art and Design in Detroit, teaches art classes and workshops and has her own studio in Richmond, Michigan.

Foster felt that Ostrand’s painting was “painted from life rather than from a photograph…(she) handled the level of difficulty beautifully while using color techniques and brush strokes that highlight the cheek and head; the mid-tones are fantastic and make the painting moody with shadows that leave a little something for the viewer to contemplate.”

Ostrand, owner of Accent on Art in downtown Lake Orion, said she saw the subject of her painting and, when she sat down to paint, flowed across the canvas.

“It just kind of flowed out of me. It felt right and I didn’t want to pick at it or change this or that. It was pretty effortless. It was done in under three hours,” Ostrand said, adding that she was surprised to win. “I took my paintings down (to the Art Center) and said, ‘Just do it, just do it.’”

“Watercolor is a difficult medium…it’s even more difficult to paint a child but she has captured pure joy in this painting. It’s very fresh and she has made it look effortless,” Foster said.

“This was obviously done from a photograph, but it has the feel that it was done from a live sitting,” Foster said, adding she can see “traces of the start of the drawing, then the addition of color and the diagonal stroke technique, which has a very distinctive style.”

The Art Center also awarded two honorable mentions: to Brooke Foster for her oil painting, “Coffee Cup”; and to Julie Sugg for her piece, “White Hawk.”

Amy Foster said “Coffee Cup” was a witty painting she would have in her own home, and that she “loves the glow and the color palette as well as the personality of the painting.”

Brooke Foster, a Lake Orion graduate, said she met the man in the painting at a coffee shop and wanted to paint the portrait of a refined elderly gentlemen sipping coffee with his pinkie finger extended.

While Sugg submitted three pieces to the exhibit, Foster said she chose “White Hawk” because “the expression of this particular piece without the eyes open still shows character and teeth are difficult to draw, but these are done beautifully.”

For more on upcoming Orion Art Center exhibits, including how to enter artwork, visit orionartcenter.org.