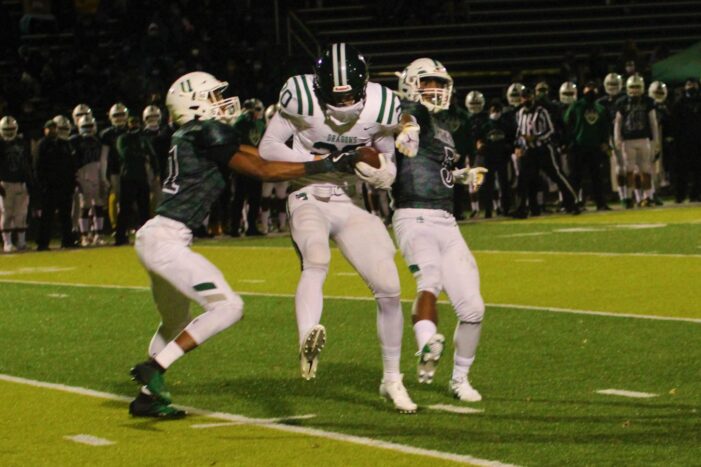 A defensive battle between Lake Orion and West Bloomfield turned into a rout with three Laker touchdowns in the football game’s final seven minutes last Friday.

The 28-0 loss dropped the Dragons’ record to 3-2 with the state playoffs starting this week. All teams qualify in the COVID-19 shortened season and Lake Orion opens on the road against Grand Blanc (5-1). Kickoff is at 7 p.m.

Against West Bloomfield, the Dragon defense largely kept the No. 6 state-ranked Lakers in check, making big plays through the first three quarters to stop drives.

“Our defense played their tails off – we told them they couldn’t have played better against the talent on the field,” said head coach John Blackstock. “Our kids won’t realize that for a couple years, until they see those kids playing on TV in college.”

The game’s turning point came with ten minutes left and the Lakers holding on to a 7-0 lead.

West Bloomfield appeared to miss a long field goal and give Lake Orion great field position for a possible game-tying drive. But a rarely called roughing the holder penalty gave the Lakers new life. West Bloomfield scored two plays later on a short run to open up a two-score lead.

Lake Orion then lost the ball on a fumble on their next play and the Lakers scored a rushing touchdown ten seconds later to put the game away.

They added a fourth touchdown run with two minutes left to close out the scoring.

The game was scoreless until just before halftime, when West Bloomfield put together an 11-play drive, capped by a touchdown pass to go up 7-0.

“At halftime, we told the team we’re still in this thing,” Blackstock said. “But we knew we’d have to grind out a score, nothing was going to be easy.

“We thought the longer we hung around, keeping it within a score, the more frustrated they’d get and the better chance we’d have.”

But Lake Orion’s offense struggled all night, only generating 168 total yards. The team reached the West Bloomfield 20-yard line only once and missed a field goal.

“We were so close on some plays, but against a team that good, you have to have everyone on the field clicking,” Blackstock said. “If just one player misses an assignment, it costs you.”

The Dragon defense was led by senior linebacker Brock Iwanski, who led the team with eight tackles.

“Brock had a heck of a game,” Blackstock said. “He’s a tough kid who plays smart. He made plays all night long against big-time talent.”

“They’re coming on strong and playing with a lot of confidence right now,” Blackstock said.

Grand Blanc has many skilled players, especially at running back and receiver, he added, also noting they run well on both sides of the ball and have good size.

Given the teams in the district bracket, which include state-ranked Clarkston and Davison in addition to Grand Blanc, Lake Orion will need to improve its passing game, Blackstock said.

The Dragons cannot rely on their rushing attack, alone.

“We have to loosen up the defense a little, or a team just sits on the run,” he said. “Until we throw the ball better, that’s what’s gonna happen. We’ll keep working on it.”

Lakers swamp the Dragons in football action added by mmkelley on October 28, 2020
View all posts by mmkelley →