Lake Orion’s resident homeless wanderer is ‘okay’ where he is 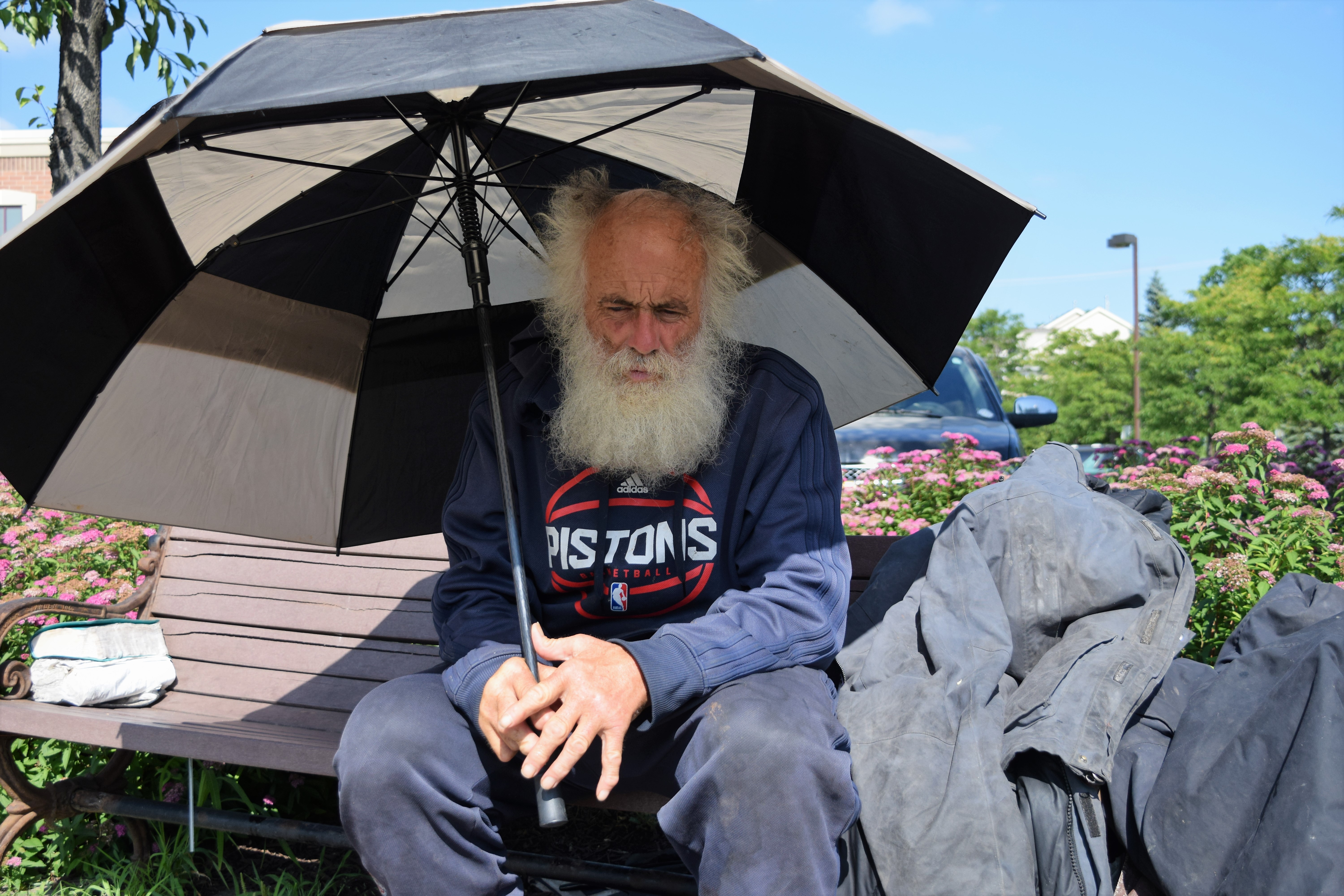 The Village of Lake Orion is home for more than 3,000 people; even for those rare few who don’t have an address.

For Bruce Gertz, Lake Orion’s homeless wanderer, home is a bench on M-24 in the village. Or, wherever he chooses to wander. Which is okay by him.

Some in the village, however, have questioned Gertz’s residency.

During the Lake Orion Village Council’s July 8 meeting, Councilmember Ray Hammond asked what can be done about relocating the “homeless individual on M-24.” Hammond asked for a representative of the police department to attend the July 22 to advise the council on its options.

The Lake Orion Village Council has postponed discussion on Bruce Gertz’s ‘camping’ in the village. The discussion is now slated for the Aug. 26 council meeting, 7:30 p.m. at Village Hall, 21 E. Church St.

“It’s postponed due to key individuals not being available due to summer vacations,” said village Manager Joe Young, adding that the village wants everyone to be involved in the discussion.

“The village is actively looking for solutions,” said council President Ken Van Portfliet in a statement issued to The Lake Orion Review.

“I find it less than satisfying that we have a plan to do away with the public camping on main street. And I think the more we tolerate that, the more we’re going to get of that type of behavior,” Hammond said. “So, not to be hard-hearted, but I think the village needs to take action on this before this individual either expands his zone or gets some companions. That’s my position on it. So, I’d like to see something move forward on that, a plan of some sorts.”

Hammond’s comments drew sharp criticism online from the Lake Orion and surrounding communities. Hundreds of people posted comments in The Lake Orion Chat Room and on the Bruce of Orion Facebook page, both in support of leaving Gertz where he is and of relocating him.

The story, which went viral, even reached Nicole Curtis, a former Lake Orion resident and star of HGTV’s Rehab Addict.

“There’s a hot debate in my hometown about the homeless man, as-in (sic) there’s only one and some feel he’s ruining the image of the town,” said Curtis on her Twitter page. “Nope, pretty sure it’s not him. Haters stay parked – I didn’t mention the town name.”

Kim Dunn has been helping Gertz for three years now: looking after him, setting up a GoFundMe drive to help keep him indoors in the winter and getting him necessities.

“He’s been a figure in my life since I was little,” said Dunn, who has been in Lake Orion since 1986 and has seen Gertz around the community a lot over those years.

“I don’t know why it’s an issue now all of a sudden,” Dunn said. “He’s been in this town longer than half of the people who’ve been here. I guess I just wish they would let him be.”

But what does Bruce want?

When asked if he likes it on the bench along M-24, watching as the cars speed, or crawl, by, he says, “Yeah, it’s okay.”

He sits quietly on the bench, umbrella in one hand to shade him from the sun, his bike and few belongings beside him. He has a tarp and umbrella for when it rains.

Next to him on the bench are two thick, worn books.

“That’s a bible. People bring them to me all the time,” Gertz said.

Gertz is actually soft-spoken, quiet, even shy when people he doesn’t know approach him. Shy, but polite. On Friday evening, a young man approaches Gertz with a to-go box of leftovers from one of the local restaurants. Gertz thanks the young man and accepts the gift.

Gertz said he talks to some people as they walk by, or stop by to check on him.

“Everyone seems nice and friendly,” Gertz said. “I know a lot of people and they know me. It’s the same ol’, same ol’.”

On Friday afternoon, Dunn visited Gertz to check on him and see if he needed anything: socks, food, water?

(Editor’s note: Gertz later received two t-shirts and, at the moment, does not need more. Check the Bruce of Orion Facebook page to see updates on items that he needs.)

Dunn says Gertz doesn’t like to tell people he doesn’t need something when they stop by and offer items to him. Last winter, people kept bringing Gertz sleeping bags. When they cleaned up the area where he was staying they found five unused sleeping bags.

“Just ask him what he needs. He’ll tell you if he needs something. If he doesn’t need anything, he’ll tell you that, too.

“He’s a kind soul. I wish more people were like him. No one should be afraid to walk up to him and talk to him,” Dunn said. “He’s not trying to be a burden on anyone. If people want to know what he needs, ask him. He’ll tell you if needs something or if he doesn’t.

Gertz said he’s 65-years-old and has been in Lake Orion for 19 years now. He grew up in Commerce Township and had relatives in Rochester, that’s how he learned about the Orion area, he says.

“They used to live there, but I don’t think they do anymore,” Gertz said.

He also has a sister in Oxford, but doesn’t talk to her anymore, he said.

As for moving Gertz to another location, Dunn said, “He loves it out there. He likes being there, he likes the lifestyle. He’s not sitting on the side of the road, he’s not in danger.”

Dunn said she also doesn’t want Gertz to move to another community.

“Here, everyone knows him, everyone looks after him,” she said. “I just really wish they would leave him alone. To me, he’s just a Lake Orion resident without an address.”

Dunn hopes to find an attorney who will take on Gertz’s case for free and help see if they can get Gertz Social Security or some other assistance “to help him out.”

Lake Orion’s resident homeless wanderer is ‘okay’ where he is added by mmkelley on July 17, 2019
View all posts by mmkelley →