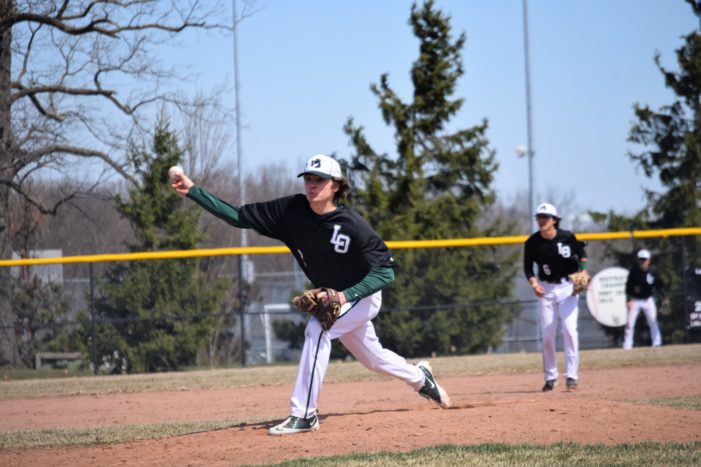 By Megan Kelley
Review Writer
Lake Orion’s varsity baseball team kicked off their season on April 8 with a big 14-6 win against Bishop Foley.
The Dragons made good use of all 14 hits by scoring a run for each hit. Jake Rydquist, Kobe Manzo, Josh Slayton, Matt Williams, and Chris Hege each had multiple hits for Lake Orion.
On April 10 the boys headed to Notre Dame Preparatory and left with an 8-6 win over the Fighting Irish.
Lake Orion found themselves trailing 6-1 at the start of the fifth inning but pulled ahead scoring six runs in the fifth, adding another in the seventh and keeping Notre Dame from scoring a single run in the rest of the game.
Leading scorers for the Dragons were Hege and Teddy Hirschfield who each managed multiple hits for the Dragons. Pitcher Adam Tisch lasted one and one-third innings, allowing two hits and one run while walking one. While Ben Ulrich pitched three innings and recorded the last nine outs to earn the save for the Dragons.
The boys traveled to Romeo High School to take on the Bulldogs on April 11. There the Dragons were handed their first loss to a close score of 5-4.
Williams started for the Dragons and pitched five innings, allowing five hits and one run while striking out two Bulldog batters. Manzo led Lake Orion with two hits in four at bats.
Lake Orion got their groove back on April 12 against Chippewa Valley where they secured another big win 13-1.
Slayton pitched the Dragons to victory by giving up zero runs on one hit over two innings, striking out four and walking one.
Hege, Stross, Williams, and Drew Van Heck each had multiple hits for Lake Orion.
On April 13 the Dragons hosted a double header against Midland High School.
Lake Orion took the first game in a come from behind victory 12-11.
The boys found themselves down 9-1 at the end of the fifth inning but were able to score an amazing 11 runs and keep Midland to just two in the sixth.
Lake Orion credits the win to pitcher Mitch Howell who pitched one and one-third innings, allowing just three hits and two runs while walking zero.
The Dragons didn’t have the same luck in their second game against Midland. Lake Orion lost 13-6.
Last season the boys went 26-6 overall.
“I don’t know if we’ll have the same record (as last year) but I expect to compete for league championships and maybe more than that,” said head coach Andy Schramek about the current season.
The boys improved their record a bit by shutting out the Oxford Wildcats on April 15 with a 7-0 win. The Dragons take on the Wildcats again on April 16.
This series of opening season play puts Lake Orion at 5-2 overall thus far.
“The league schedule starts and we play three game series for the next five weeks against tough opponents so,” said Schramek “We like to play all of our games but in particular the league games. I try to schedule our non-league games with the best opponents from around the state if we can so we have a very challenging schedule.”