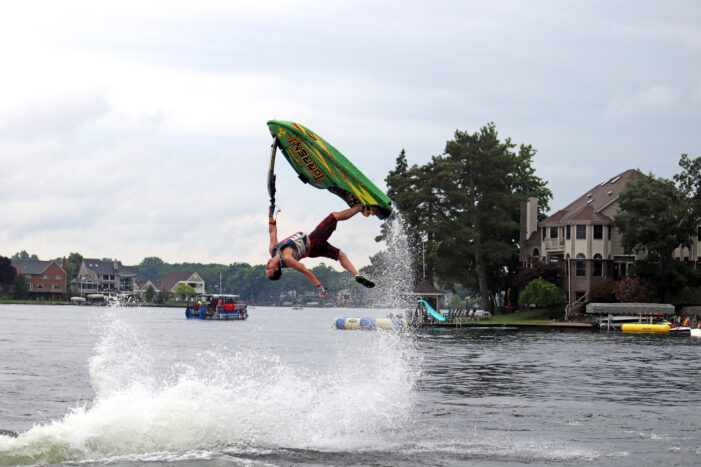 Sutton Wright captured first-place in both the 550 Stock and Vintage up to 650 events, while Tanner DeLong, Evan Krefski, and Justin Sylvain added additional first-place finishing positions in the Freestyle 900, Freestyle 1,500, and Super Chicken Race, respectively.

Limiting the event to 60 competitors, due to a maximum allowable capacity of 100 people, Brave the Wave drew in top-three finishers from other states, as well.

“The class itself for Freestyle 1,500 is based on engine size,” shared Krefski, who has thrice participated in Brave the Wave and began competing on jet skis when he was 16-years-old.

“The jet skis we ride are specifically built for freestyle, they’re made to do flips and, with big motors and stuff like that, they’re all custom-built.”

Even with the limit on the number of participants and spectators, Krefski, a 2014 Lake Orion High School graduate, thought the event still delivered an enjoyable atmosphere.

“I think it’s a plus it even happened,” he pointed out. “Being that they had to cut it off, I would say it’s better safe than sorry.

“So, it did change a little bit in terms of people being able to watch, but there were still a lot of people out on their boats and things like that. The competition was obviously a little bit smaller because it was limited, but some people raced in three different things, three different classes, so it didn’t really feel like there was that small of an amount of people.”

Securing first-place comes with more than just a sense of accomplishment; class winners were awarded financial prizes, as well.

“This event (the 1,500 Freestyle) has been really, really good for high prize money, which is very rare in jet skiing,” Krefski shared.

“This year was different because there weren’t as many people, sponsorships were low, they didn’t even know if it was going to happen, but they were still able to pay $400 for first-place, so that’s pretty good.

Surrounded by friends and family on the lake with temperatures reaching 80 degrees Fahrenheit, there are far worse ways to spend a beautiful summer day.

Information about Brave the Wave and other jet ski events is available on the Michigan Wave Makers website, michiganwavemakers.com, as well as their Facebook page.