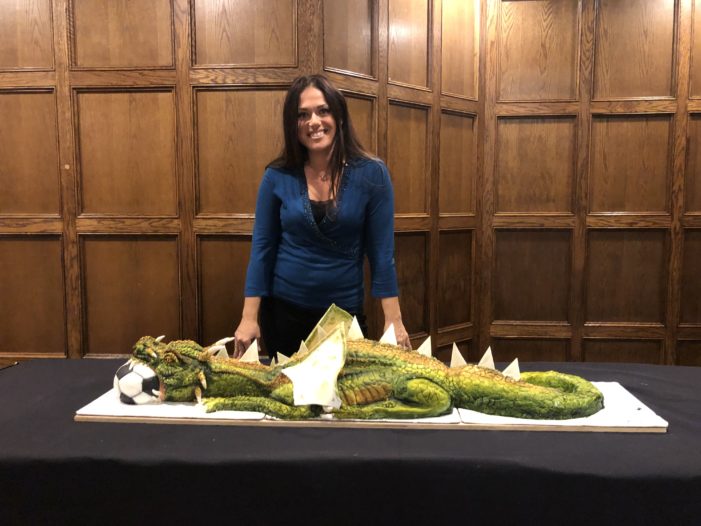 Dragon pride runs deep in Lake Orion. Over the years, the myth of the Lake Orion Dragon has become a staple in the community, even taking over as the area’s most beloved mascot.

Here in Lake Orion, everyone is a Dragon.

For Tanya Gojcaj, a Dragon mom of six herself, Lake Orion pride plays a huge part in her own life.

Gojcaj’s family of athletes consists of five soccer players, two of whom play for Lake Orion High School, her oldest being a senior.

Because of her attachment to Lake Orion Community Schools, this self-proclaimed “die hard Dragon” goes above and beyond to create a cake for the LOHS boy soccer banquet each year.

This year, however, she wanted to create something big and bold that would captivate everyone, she said.

“They’re all awesome, well-rounded boys,” said Gojcaj. “The unity they had…it doesn’t matter if you’re on freshman, JV or varsity…and they all played so well this year.”

This artist turned baker started work on her Dragon cake early on Nov. 3. With the boys soccer banquet just on the horizon (Nov. 5), Gojcaj only had so much time to create this masterpiece.

Gojcaj pulled from her own previous work, a mural she created at Paint Creek Elementary School, to create what she called “her dragon” — only this time, in the form of a cake.

Armed with her inspiration, she began the long process of prepping, shaping, molding and adding endless details.

Thirty-two hours later, after baking, doing fondant work, molding modeling chocolate and so much detail work, she had finally completed her work.

Not only was Gojcaj happy with her work but so were the many Dragons and their families who attended this year’s LOHS boys soccer banquet.

Her husband couldn’t even put the cake down fast enough before players and parents gathered around the dragon in awe, Gojcaj said.

“It went viral,” said Gojcaj. “High school kids I had never met started following me on social media and stuff, it was crazy.”

As for the taste, everyone loved it. You can’t go wrong when you make from scratch, Gojcaj said.

“It was literally built on so much love,” said Gojcaj. “I love every single one of those kids.”

Lake Orion mom creates ‘epic’ cake suitable for a weyr of dragons added by mmkelley on November 13, 2019
View all posts by mmkelley →