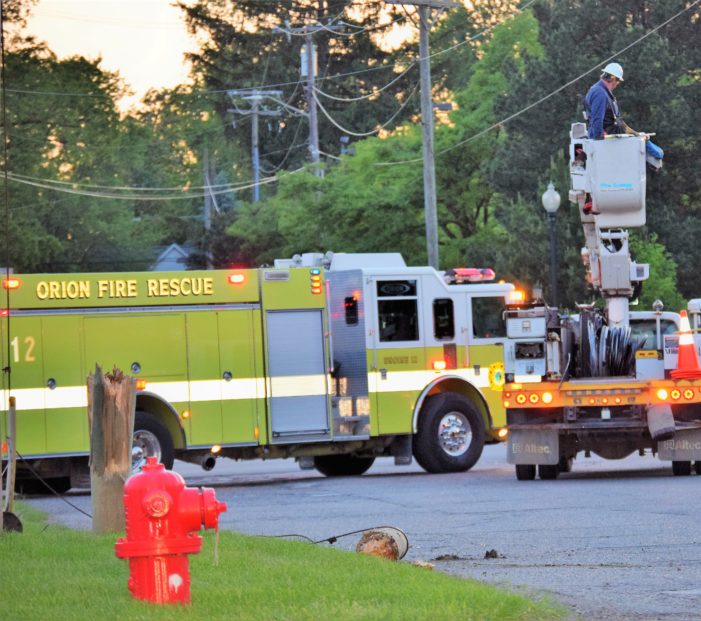 A Lake Orion man has been arrested after crashing into an electrical pole and a home in the Village of Lake Orion and then leaving the scene of both accidents.

The incident began around 8:10 p.m. Monday when a man driving a white 2002 Chevrolet SUV was apparently traveling southbound on M-24 when he swerved to the left, drove across the PNC Bank lawn and parking lot, hit an electrical pole on Shadbolt Street, across from Forster’s Auto Wash, and kept on going.

“It looks like he missed his turn. He was probably going too fast,” said Lake Orion Police Chief Jerry Narsh.

The suspect has been identified as a 37-year-old Lake Orion man. Police did not release the man’s identity.

Lake Orion police officers responded and secured the Shadbolt Street scene, and the Orion Township fire department blocked off Shadbolt at M-24 until DTE Energy workers could repair the damage.

Several businesses in the area were without power, including Forster and PNC Bank.

Allan Miller and his fiancée, Courtney Caldwell, were making dinner in their home on Lapeer Street, north of Shadbolt, at the time of the accident.

“I heard ‘boom, boom, boom’ and the lights came down, went off, came back on. I told Courtney, that’s usually a sign of a transformer (problem). We heard the loud boom, came out and talked to our neighbors,” Miller said, adding police vehicles were driving back and forth on the road. “People were saying, ‘Hey, did you see a white SUV with a blown-out window, molding hanging?’”

After fleeing from the Shadbolt Street accident, the man then drove to Flint Street where he reportedly crashed into a home, causing minimal damage.

“He pulled into their driveway and hit their porch, causing damage to the rail around the porch,” Narsh said.

No one was injured in either accident.

Authorities then learned that the man drove to his daughter’s home in Oxford. That’s when the daughter called authorities and reported that her father had been in an accident and fled the scene.

After the accidents, but before arriving at his daughter’s home, man reportedly texted his daughter, saying, “I think I’m in trouble,” Narsh said

A Lake Orion police officer collected debris from the damaged vehicle at each of the accident sites and went to the daughter’s home, matching those pieces to the damage on the suspect’s vehicle, Narsh said.

The man was arrested and charged with reckless driving, leaving the scene (of an accident) and failing to report an accident, Narsh said. “He did admit to both accidents.”

While alcohol was not a factor in the crashes, the suspect was apparently huffing – inhaling household or chemicals to produce intoxication – a spray can duster when the Lake Orion police officer arrived in Oxford.

The man told the officer that he had not been huffing when he was driving, Narsh said.

Lake Orion man arrested in hit-and-run accidents in the village added by mmkelley on June 12, 2019
View all posts by mmkelley →