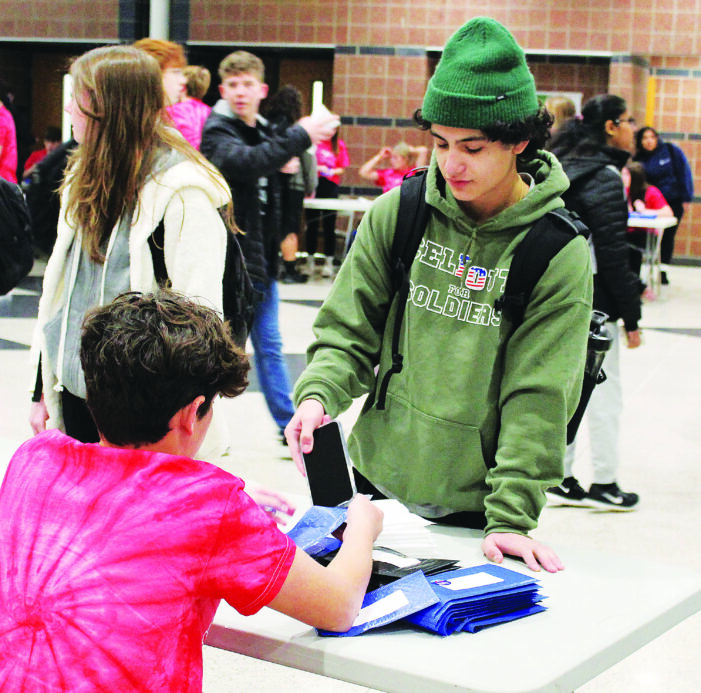 By Megan Kelley
Review Writer
ORION TWP. — For most school districts across the county, Friday was just a normal day.
But for students at Lake Orion High School, it was one of the most exciting days of the year, the annual Cell Out event.
This is Lake Orion’s eighth year participating in the event, which raises money for talk minutes for active duty military overseas.
“Every Cell Out event, highschoolers give up their cell phones for the day in exchange for talk minutes for soldiers overseas. We donate one dollar for every phone that’s donated to the Cell Phones for Soldiers Charity,” said student organizer Grace Hensely.
This year, more than 2,000 students voluntarily gave up their phones for the day. Each student that turned in a phone also got a Cell Out t-shirt.
“Students come in and we ask them to power off their phones and then we have a bunch of bubble wrap bags and we ask them to put their phones in the bag. We seal it, we put their name on it and put a little label that says ‘Cell Out for Soldiers’ on it,” said Ryann Pawlaczyk, co-organizer of Cell Out.
“Throughout the day, they’ll bring the bubble bag with them from class to class and every teacher will have a bin where they can put their phone at the beginning of the hour and take it and go to their next hour,” Pawlaczyk added.
Cell Out has become a staple at Lake Orion High School. What started as an idea from teacher Lori Hogan has turned into a regular event put on by the school’s Leadership Development Workshop class
“It started eight years ago. Mrs. Hogan saw it on Good Morning America. It was about a charity giving talk minutes to soldiers because they have really high phone bills when they come back from war. So, she saw it and thought it was something Lake Orion could do and so we just want to keep continuing the legacy. It’s a great thing that we do,” Pawlaczyk said.
The Lake Orion Leadership class has turned the event into an all-day celebration with a Community Heroes volleyball game taking place during the day where local members of the community including veterans, firefighters, and active duty military members come out to participate in a game inside a packed LOHS Field House.