Olivia West Long was a standout athlete and student at Lake Orion High School, traits she continued when she went to Michigan State University in the fall of 2019.

On Friday, Aug. 27, Long died at Sparrow Hospital in Lansing from injuries suffered in a car accident the day before. 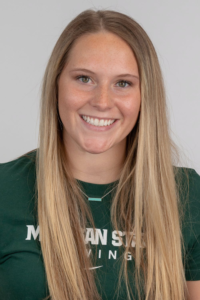 Long, 20, of Oxford, was returning to Michigan State University after visiting friends in Holland when she collided with the back of a box truck on Interstate 96 on Thursday in Portland Township, according to Ionia County deputies.

Long earned All-Conference Honors that year and was on the watch lists for 2018 Under Armour High School All-America and 2017 Ultra Ankle JVA honors and was also on the AVCA Phenom list.

Despite her success in volleyball, Long chose to pursue rowing at Michigan State University.

In November 2018 she joined 14 of her Lake Orion classmates as they signed their letters of intent to play college sports, with Long the only Dragon to go to college for rowing.

Long was voted captain of the rowing team for her junior year, according to Michigan State University.

“We have lost a young, promising life way too early,” Michigan State University Rowing Head Coach Kim Chavers said. “Olivia was an excellent teammate who was invested in those around her and our program. As a captain, she connected with a lot of different people, and on a team as large as ours, team building is especially important. Our rowing family will miss her tremendously and will find a way to honor her legacy as we lean on one another to process our loss.”

“Our prayers go out to Olivia Long’s family and friends,” Michigan State University Athletic Director Bill Beekman said. “Olivia loved being a Spartan, and as a leader developed incredible connections with so many of her teammates. To lose her so soon seems especially cruel.”

Long enrolled at Michigan State for the 2019-20 academic year, and was majoring in communications. She was awarded an athletic scholarship with the Women’s Rowing Team and earned an Academic All-Big Ten honors.

Despite having her freshman season canceled due to the COVID-19 pandemic, Long earned a spot in MSU’s varsity eight boat for her sophomore season, according to an MSU tribute.

A funeral service is planned for noon on Saturday at Modetz Funeral Home Silverbell Chapel. Visitation is from 2-8 p.m. Friday.

Family and friends can leave condolences on Olivia’s tribute wall at www.modetzfuneralhomes.com.

“Anyone who knew Olivia, knew that she was an open, inclusive advocate for those who needed support, a listening ear or a helping hand. She was a bright light and inspiration to those who met her. Her family and friends will miss their ladybug more than words can say,” Long’s family wrote in her obituary.

The family has also asked that people who want to support them do so by helping raise funds for a scholarship, and they have set up a GoFundMe page.

“We would like to honor Olivia by raising funds to support the Lake Orion High School Volleyball and the Michigan State Women’s Rowing Team. Our intent is to create scholarships or something similar in Olivia’s name. These two organizations meant so much to Olivia and helped to mold her into the dedicated, confident lady and advocate that she was. We would like to provide other young women the opportunity to grow their confidence in themselves through sports just as Olivia was able to do.”

Donations can be made at gofundme.com by typing “Olivia Long Memorial Fund” into the search bar.