Lady Dragons routed by Avondale in return from break 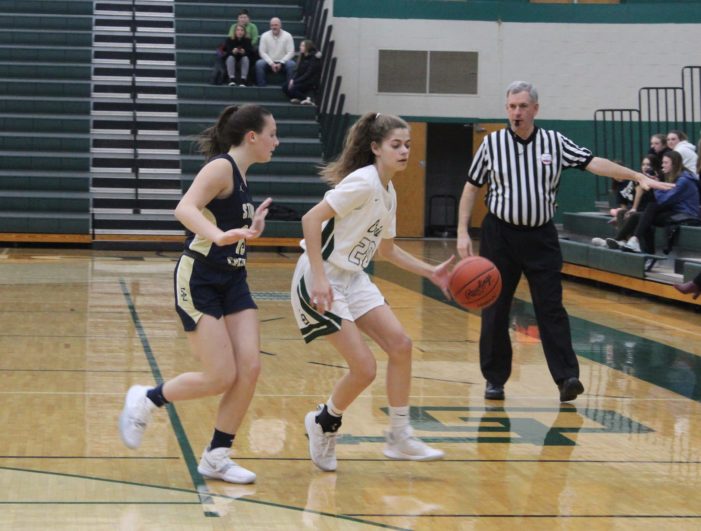 The first action for the team since Dec. 17, the Lake Orion Dragons girls basketball team returned to the hardwood to battle the Avondale Yellow Jackets on Jan. 6 at Lake Orion High School.

The Yellow Jackets, who did have a game over Christmas break, set the tone early with some full-court pressure and cruised to a 52-29 victory, handing the Dragons their second straight loss in the process.

Avondale jumped out to a 12-4 lead after the opening frame and took a double-digit cushion into the halftime break.

Senior Keiori Lee, one of the Oakland Activities Association’s top players, poured in a game-high 22 points for the Yellow Jackets, while junior Brala Benion chipped in 15 points of her own.

“In the tape we had of them (Avondale), they didn’t come out with a lot of pressure,” Dragons head coach Bob Brydges explained.

“But everyone has had a month to work on stuff and we’re a really young team. Our two primary ball-handlers are a freshman and a sophomore, and it showed tonight. We played 13 girls tonight and only five of them played varsity basketball a year ago.”

In addition to Ebbert, freshman Kylie Heck and sophomore Kacy Lauer see significant minutes in the backcourt for Brydges’ team.

“This was a real good test for us,” the coach continued. “Avondale is projected to win the league and we saw why tonight. Just one of those things, we must learn from this and get better.”

The lone winless team in the division, Lake Orion will look to pick up their first league win of the season on Thursday at home against the North Farmington Raiders (6-3, 2-2 OAA White) at 7 p.m.

The Yellow Jackets improved to 4-4 (2-0 OAA White) with the victory, joining the Troy Athens Red Hawks as one of two unbeaten teams in the division.

“We’re better when we get in transition and put some pressure on the basketball,” Avondale head coach Bob Lees summarized.

Showing the ability to score from behind the three-point arc, at the free-throw line and everywhere between, Lees also touched on Lee’s impact on his team. “We’ve gone as she’s gone for the last three weeks. She had a slow start to the season, but she’s really picked it up here lately.”

Lady Dragons routed by Avondale in return from break added by mmkelley on January 8, 2020
View all posts by mmkelley →