If you don’t know it’s your own danged fault.

So, last week in these parts we had local elections. Regular Joes and Joettes “flocked” to their local polling stations to take part in, and exercise their rights in this, the American Democratic Experiment (ADE for short).
By the way, when I say “flocked” I mean somewhere south of 30 percent of the voting populace thought it was important enough to actually vote. And, I can guarantee you somewhere near 100 percent of the 70 percent of the non-voting folks will complain about the results. I am gonna’ call them the Whining Class, or Whiners, from now on.
At stake this past week were questions like, “Which Republicans will run unopposed this November for Township Supervisor, Clerk, Treasurer and Trustees?” (Read: No Democrat Need Apply). Local governments asked voters to support police, fire and emergency services with either tax increases or renewals . . . AND . . .
. . . Local school districts asked funding questions, too. Three of the five districts we cover (Clarkston, Oxford, Orion, Goodrich and Brandon) passed their funding proposals (and if you had a public education like I did, you can deduce two districts did not pass their funding initiatives).
Election Day (or Stay On Your Couch And Watch TV Day for the majority of folks, excuse me, Whiners) was last Tuesday. Last Wednesday, the local Socialmediasphere was spinning outta’ control. It was on fire! Some were outraged their school funding issues passed. Others were miffed because their’s went down in flames. All over the region peeps were bemoaning, “How could this happen?” “I didn’t know there was an election.” “The issues were not explained well enough.”

You get the picture. Whiners are gonna’ need a reason to whine and that means finding and pointing out who to blame for the sorry state of their affairs. Guess what? Nearly ALL of the Whining Class found someone to blame and, in nearly all of those cases, it wasn’t the person they see in the mirror every morning. Nope, the problem was with the local school district. The districts did not do enough to educate the electorate.
True confessions: Yes, I voted (was number 141 in my precinct); and yes, I spent way too much time and energy on Wednesday stirring the pot on social media telling folks they suck.
I said things like:

1. Being a part of a community takes an effort.
2. Democracy requires citizens to be educated and informed and self-reliance and initiative.
3. There are no excuses for being uninformed.

Just because you live in a community, doesn’t mean you are a part of it. If you are a part of something, you expend energy on its behalf — more than just doing the bare minimum of paying your taxes.
I read over and over, “not everybody reads the paper or goes to meetings to know what is going on.” To which my first reaction was, “and whose fault is that?”
I think many folks are like little baby birds, all googly-eyed and fleshly, sitting on their butts, with their heads up, mouths open, chirping, “feed me, feed me.” They want their “parents” (benevolent government types) to do more to “educate” their grown-ass selves. They want — no need — to be spoon-fed information — and only the stuff they desire to hear. (Think, ice cream all the time, no broccoli.)

The Whining Class doesn’t want to hear anything negative about their guy, or gal or their party affiliation. Oh, no. They only want to hear, read or watch that which reaffirms their own beliefs. Nobody ever likes to be challenged, but nowadays this Whining Class has taken it to an entirely new level of self-actualization based on others’ perceptions.
These folk desire to be mollycoddled from sperm to worm, or if you prefer, from birth to earth.
Now, I will never say local governments and schools are as transparent as they can be. Some are better than others and some are downright closed off to communicating with citizens. But, with the local school issues that were on the ballot, all voting-aged people should have had a clue what was on the ballot and what was at stake.
“But, Don,” you rebut, “I don’t have kids in school, so I didn’t know.”
True. School districts should send out newsletters to every address in the district, not just district parents — but I retort thusly, “Even if you do not have kids attending school in the district, your home is being taxed by the schools. If you have issues with the schools and your money, it is up to you to stay informed.”
All districts have websites to start finding out information. Also, our newspapers did a ton of reporting on the issues. The information was out there, but again, it takes initiative on the electorate’s part to find it.
For less than a dollar a week, this newspaper will be delivered to your mailbox. If you have questions you want asked of your local elites, you can email them, or come and actually talk to me or the editor or the reporter. You can use us to ask your questions. We have no problems asking hard questions.
We are a resource, but if folks want to be informed they need to take an initiative and use the resources available to them. So, if you don’t know something, look in the mirror, it might be your own damn fault. 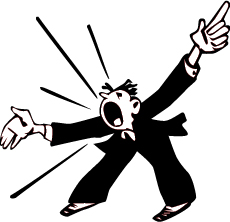 Okay, rant over. I am stepping off my soap box and going to my own, personal happy place inside my head.

One Response to "If you don’t know it’s your own danged fault."