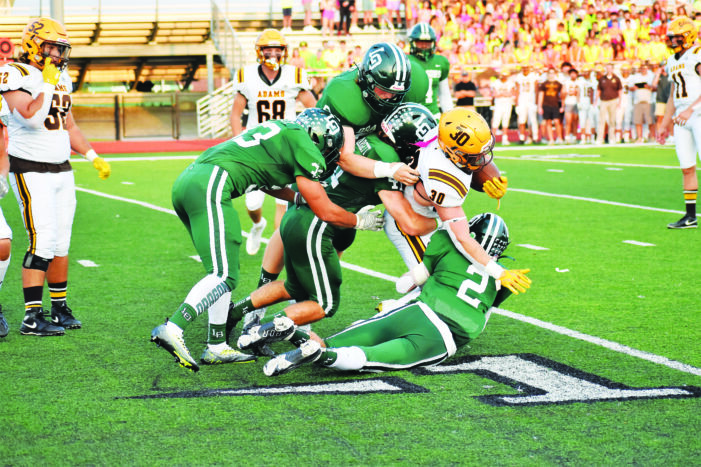 By Jim Newell
Review Editor
ORION TWP. — Lake Orion head coach Chris Bell said there are no easy games in the Oakland Activities Association Red Division.
And when Rochester Adams traveled to Dragon Stadium on Friday, the Highlanders gave the Dragons more than they could handle on their way to a 42-21 route.
Heading into the game, Lake Orion had the edge in the series with 21 wins to Adams’ 14 wins. Lake Orion was coming off a big win the previous week against Oxford, and Adams lost its last game to Clarkston.
The Dragons received the ball to open the game and fumbled on the first play, with Adams recovering on the Dragon’s 11-yard line. On third down less than two minutes into the game the Highlanders punched through the Dragon defense for a touchdown. The point after was good, giving Adams the early 7-0 lead.
Lake Orion punted on their next two possessions and Adams managed a field goal, going up 10-0.
The Dragons got the ball back on their own 20-yard line after the kickoff. With 43 seconds left in the first quarter, junior running back Billy Roberson broke through the Adams defense for an 80-yard touchdown, putting the Dragons on the board.
The point after attempt was good, making the score 10-7 Adams.
Things began to look good for the Dragons in the second quarter when Roberson broke free for another long run, going 85 yards to score with 11:13 left in the half. The point after was good, giving the Dragons a 14-10 lead.
It was all Adams after that.
The Highlanders got a field goal with 8:23 left in the second quarter, making it 14-13 Lake Orion.
With 42 seconds left in the half, Adams was on the Lake Orion 5-yard line and plowed through the Dragon defense for TD. The point after was good, giving Adams the 20-14 at the half.
In the third quarter, Adams’ running back Tait Picot rushed for a 31-yard TD just 49 seconds in the second half. Adams was then successful on the two-point conversion, taking the 28-14 lead.
At the end of the third quarter Adams led 35-14 and then added another score off Parker Picot’s 31-yard TD pass to the back of the endzone. After the extra point, with 9:07 left in the game, Adams led 42-14.
Lake Orion managed to stop Adams’ offense for the remainder of the game while adding a TD of their own for a final score of 42-21.
Lake Orion is now 2-2 on the season.
The Dragons travel to Rochester Hills for another OAA Red matchup against Stoney Creek on Friday. Game time is 7 p.m.
Lake Orion’s next home game is Homecoming 7 p.m. on Oct. 7 against Clarkston.

Highlanders dominate the Dragons in lopsided, 42-21 win added by mmkelley on September 21, 2022
View all posts by mmkelley →