Dragons slay the Knights for their first football win of 2020 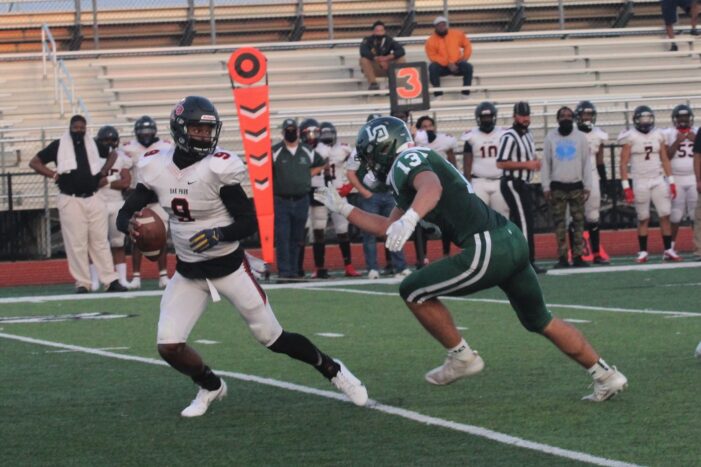 The team’s season opener was canceled the week before due to positive COVID-19 tests in the football program. This came after its first three games were canceled because of the suspension of the high school season in August due to the pandemic.

Any question about Lake Orion’s readiness to play was quickly answered in the first five minutes of the game against the Knights.

After Lake Orion’s defense shut down Oak Park on its first drive, capped by an 11-yard quarterback sack, the Dragons returned the ensuing punt deep inside Knight territory. Three plays later, senior A.J. Mouzon sprinted 19 yards to the endzone, for Lake Orion’s first points of the season. The touchdown and point(s) after touchdown (PAT) the Dragons a 7-0 lead.

“We talked all week about the importance of starting fast and jumping on our opponents early, something we did a lot last year,” said head coach John Blackstock. “Coming out like that was huge in a game like this.”

A big fourth-down stop by the Dragon defense on the Knights’ second possession then spurred a 12-play, 60-yard Lake Orion drive, capped by a 24-yard field goal by senior Andrew Bryant in the second quarter.

Offensive penalties derailed the Knights on their next series, pinning them deep in their territory. This set up the decisive play in Lake Orion’s dominant first half, when senior Kade Manzo returned the Oak Park punt 44 yards for a touchdown (PAT good), giving the Dragons a 17-0 lead.

“Up 10-0 is not a big enough lead against a team like Oak Park, so that punt return was a big emotional lift for us and sparked even more energy,” Blackstock said. “Plus it gave us breathing room.”

The Knights’ attempt to turn the momentum before halftime turned disastrous when senior Brennan Jones intercepted the Oak Park quarterback at the Knight 35-yard line. With less than a minute to go, junior Nasir Lardell punched the ball into the end zone (PAT good) to give Lake Orion a 24-0 lead at the break.

“We played about as well as a first half in an opening game as we could play,” Blackstock said. “But we reminded the kids that we don’t look at the scoreboard. It was nice that they took it to heart.”

The two teams traded punts and field position in a scoreless third quarter. But the Dragons did launch a 12-play drive, capped by senior quarterback Drew Knieper’s two-yard scoring dive early in the final quarter (PAT good) to stretch Lake Orion’s rout to 31-0.

The Dragon shutout ended seconds later, however, when Oak Park’s big-play offense finally awoke on a 77-yard touchdown run (PAT no good), cutting their deficit to 31-6.

Lake Orion closed the door on the unlikely comeback with yet another long drive on its next possession, an 11-play march finished by senior Brendan Hastings two-yard plunge (PAT good) that sealed the Dragons’ opening victory.

“I can’t say enough about the three and how they’re handling a challenging situation,” he said. “All three want to be the guy. They grew up wanting to be in that role. All three got the job done when they went on the field.

“When one of them led a scoring drive, the others were right there on the sideline congratulating him. You don’t see that too often – they’re a special group.”

Questions about the Dragon running game were answered, as well, with a group of backs rushing for 208 yards, led by Mouzon’s 51 on the ground.

Blackstock said the strong play of the offensive line spurred the team’s rushing success. Not only did it open big holes all game long, but Lake Orion was 4/4 on fourth downs to keep drives alive.

“We liked what we saw from the o-line but, believe it or not, they all know they can play even better,” Blackstock said. “They will have to with this schedule.”

Blackstock said the Warriors give the Dragons one of their most physical games each year and he expects the same on Friday. He also said the games have been close, with the victory often coming down to who has the ball last.

“We told our players this is not your typical 0-2 team,” Blackstock said. “They had the lead at Clarkston and gave West Bloomfield all they could handle. These kids can play.”

Dragons slay the Knights for their first football win of 2020 added by mmkelley on September 30, 2020
View all posts by mmkelley →