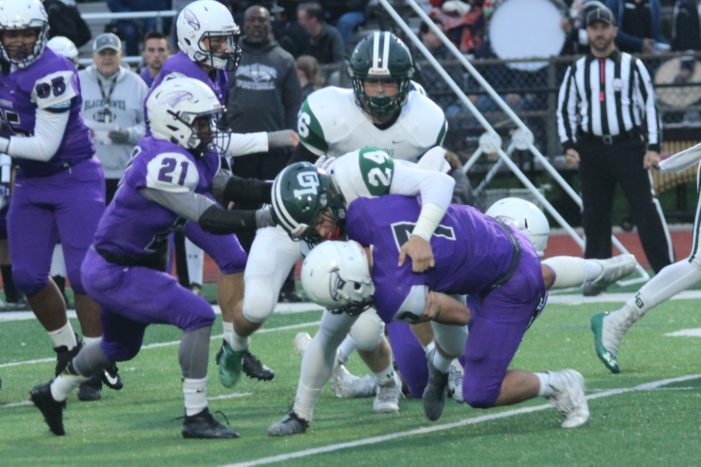 Lake Orion’s march to the MHSAA football playoffs continued last Friday, with a dominating win over Bloomfield Hills on the road, 42-6.

The victory improves the Dragons’ record to 5-1 (4-1 OAA Red) with one more win needed for an automatic berth into postseason play.

“We’re really happy where we are at, with the opportunity to shore up a playoff spot at this point in the season,” said Head Coach John Blackstock. “But we’re all focused on how good this team can really be, and trying to get better each day.

“Believe me, we watch the film and there are plenty of improvements that need to be made for this week’s game and down the road.”

Lake Orion started fast against Bloomfield Hills, scoring on its first offensive play of the game on a 67-yard run by senior Mitch Howell.

By the end of the first quarter, the Dragons had scored twice more on touchdown runs by senior Kobe Manzo to take control of the game.

Bloomfield Hills did get on the scoreboard on a touchdown pass in the second quarter, but Lake Orion senior quarterback Blaze Lauer’s touchdown sprints of 60 and 62 yards put the game out of reach for the overmatched Blackhawks .

Howell’s 18-yard touchdown run in the third quarter put the Dragons up by 36 points, triggering a running clock. Lake Orion inserted several reserve players into the game at that point to secure valuable playing time.

“It was a nice opportunity to play a lot of kids who deserved a chance to play and needed to play, so we can evaluate them in game situations,” Blackstock said.

The Dragons generated 423 yards of total offense, including 375 on the ground.

Lauer accounted for 141 yards rushing, most of them on his scoring runs. Manzo rambled for 96 yards and Howell finished with 85 yards on two carries. Senior receiver Drew Vanheck contributed with 30 yards rushing and a reception for 13 yards.

The Dragon defense played particularly well against the run, giving up minus-24 rushing yards on the night. The Blackhawks only ran 39 plays for the game and went 0-11 on third down conversions.

“This is a pretty senior-heavy group of defensive players and they are doing a great job,” Blackstock said. “They really seem to enjoy playing with each other and for each other. They bring a lot of energy and enthusiasm and feed off each other.”

This Friday, Lake Orion plays its annual Homecoming game against Rochester, which has a 1-5 record (1-4 OAA Red) after losing last week to Troy Athens. The Falcons are underdogs, but sit in the way of the Dragons’ playoff berth. Blackstock said they will not be taken lightly.

“We tell the kids to enjoy Homecoming week, but don’t forget their job, which is to win the football game,” Blackstock said. “Plus, winning sure makes the Homecoming dance more fun.”

Dragons rip Blackhawks, move closer to a football playoff spot added by mmkelley on October 9, 2019
View all posts by mmkelley →