Dragons rebound with big win over the Falcons 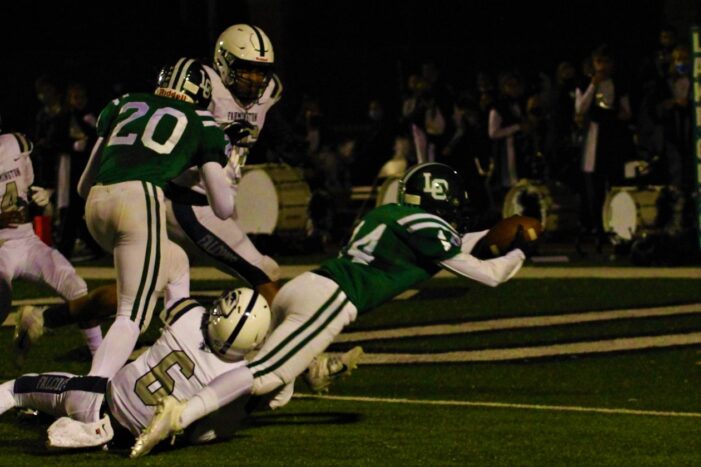 A dominant first half in all phases of the game sparked Lake Orion to a 35-7 victory over Farmington in football action last Friday.

The Dragon rushing attack ripped the Falcons for 310 yards and three touchdowns. Lake Orion passed for 68 yards and another score. The team’s defensive unit, meanwhile, limited Farmington to 208 total yards and chipped in with a decisive, back-breaking touchdown on an interception return.

All of Lake Orion’s points came in the first half. With the big lead, the Dragons were able to play many reserve players during the second half of the game.

The win improved the Dragons’ record to 3-1, with their final regular season game on the road this week at West Bloomfield.

“It was great to get the win and have the opportunity to play the number of kids for the amount of time that we did,” said head coach John Blackstock. “It’s important for them to get significant playing time on the field as we prepare for the playoff run.”

It did not take long for Lake Orion’s offense to breathe fire after stopping Farmington on fourth and short on the game’s opening possession. Taking over at the Falcon 45-yard line, the Dragons took three plays to open the scoring, highlighted by junior Brendan Hastings 28-yard touchdown run.

After the defense forced a short punt, Lake Orion’s second possession featured only four plays, capped by junior quarterback Kyler Carson’s 21-yard sprint to the endzone that upped the Dragons’ lead to 14-0 after one quarter.

Pinned deep in their own territory early in the second quarter, Farmington’s quarterback forced a pass into coverage and Lake Orion’s defense joined the fun with senior Kade Manzo’s 13-yard interception return for a touchdown to extend the lead to 21-0.

“Kade is playing like we expected him to,” Blackstock said. “He makes big plays for us on special teams and on defense. He plays physical football. It’s not surprising he’s our emotional leader.”

Lake Orion took advantage of great field position once again on its next possession, needing only two plays to move the ball 47 yards, with Carson passing to Hastings for a 42-yard touchdown score and a 28-0 lead. It was Hasting’s fourth touchdown of the year.

“That first half was a team effort,” Blackstock said. “Our special teams played well and the defense did a really nice job not allowing Farmington to move the ball, which really set up our offense with some short fields.

“Our offensive line set the tone for our running success and we got the passing game going a little bit.”

The Falcons avoided the shutout late in the fourth quarter on an 81-yard touchdown reception.

The Dragon defense was led by Ilario Marku and Joey Thede, who each recorded six tackles. Brennan Jones and Lardell had five a piece.

Blackstock expects a much different game this week against the Lakers. West Bloomfield (4-1) dominated Rochester Adams in its last game, 37-0.

“I expect a physical game,” Blackstock said. “We also usually score quite a few points between the two teams. To win, we’re going to have to do a good job containing them and not allowing the big play, or giving their offense a short field.”

Dragons rebound with big win over the Falcons added by mmkelley on October 21, 2020
View all posts by mmkelley →