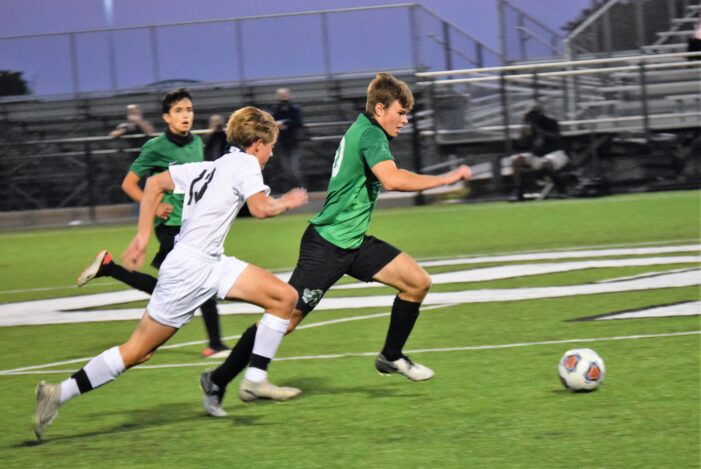 As expected, when Lake Orion and Oxford meet up, the boys varsity soccer game was a back-and-forth, physical matchup right up until the end.

And at the final whistle, the Dragons and Wildcats had played to a 2-2 draw Thursday at Lake Orion High School, the only regular season matchup between the teams.

“Oxford’s a good team. They’re well coached and undefeated in the league, so it’s a battle for first place,” Lake Orion head coach Chris Corteg said. “You get a 2-2 tie it’s a good result. Though I felt like we lost. We had two goals called back. But in the end, we got a point.”

The Dragons have been impressive against tough opponents, defeating Avondale (5-0), Sterling Heights Stevenson (4-1) and Rochester (2-1), with ties against Royal Oak (0-0) and Oxford.

Their losses have come against two tough Birmingham teams – Seaholm and Groves – both by a score of 1-3.

“I like Chris Corteg. I like their coaching staff. It’s a fun game because we both compete. A lot of these kids play the same club (teams) together, they know each other,” Bican said.

It looked like Lake Orion held the momentum early in the first half, pressuring Oxford and keeping play mostly in the Wildcat’s half of the field.

However, Oxford’s Christian Mendoza started the scoring with 23:21 left in the first half to give the Wildcats the 1-0 lead, which they would take into halftime. Mendoza’s goal also shifted the momentum to more balanced play.

Down a goal to start the second half, the Dragons turned up the pressure on offense, attacking the Oxford goal.

Senior Caden Bozigar netted his first goal at 35:08, less than five minutes in, following it up just over a minute-and-a-half later with his second goal, giving the Dragons the 2-1 lead.

Lake Orion junior defender Mark Gojcaj received a red card on a questionable call and was ejected from the game, forcing the Dragons to play a man down with 25 minutes left to play.

There were also five yellow cards (warnings) given throughout the game; three for Oxford and two for Lake Orion.

The Wildcats got a good break with 11:09 left in the game when senior forward Zach Townsend scored to tie the game 2-2.

Both teams fought for the advantage for the remainder of the game, with neither able to capitalize on their opportunities.

Senior goalkeepers John Gentner for Lake Orion and Tristan Bennett for Oxford both made crucial saves to keep the ball out of the back of the net and preserve the tie.

Lake Orion also had two goals disallowed in the game because players offsides.

Sophomore midfield/defender Stephen Jakubowski got injured during the game and sat out for 20 minutes or more. “He’s been rock solid in the back for us,” Corteg said.

“What I really liked about it was it was a hard-fought game and super clean. You always like to see that,” Bican said, adding that the yellow cards “were more from aggressive play, not dirty play” from both teams. “I’m okay with that.”

Much like Corteg, Bican also sees where the team could have done better and possibly secured the win.

“I think we missed some pretty good opportunities there and I think we let down for about a minute and 34 seconds and let in two goals. Besides that, I was pretty happy with the discipline defensively,” Bican said. “I’m glad we came back and had more opportunities to score.”

Corteg is happy with his team and how they are playing, overall, this season, noting that seniors Nicholas Fisher, Mike Boger, John Gentner and Caden Bozigar are “solid, core players.”

“It’s a good group of kids. Pretty young, actually,” the coach said. The team has eight sophomores and only five juniors, so there is room for development in the future.

“We’ve had some injuries, like (senior captain) Mike Boger, but I like where we’re at,” Corteg said. “We’ve got a big team. At Seaholm, my second group of players played 30 minutes and it was 2-1 late in the game. Same thing with Groves. We played our best guys, but it was 2-1 late. So, we’ve been competitive.”

“We’re still in the hunt for the league. We’re going to need a little help. We still have to play Farmington, West Bloomfield and Bloomfield Hills league matches. We probably need to win out, get three points in those. And we need some help for Oxford to get a couple ties or certainly a loss and tie. The league’s pretty balanced.”

Lake Orion will make district playoffs, but Corteg says their district is one of the toughest two or three districts in the state.

Last year, Lake Orion got a bye in the first round, upset Eisenhower 2-0 and then lost in overtime to Rochester Adams in the district championship.

The Dragons next play today against West Bloomfield at Lake Orion before traveling to Farmington on Thursday. Both games are at 7 p.m.

Lake Orion has four more games after that before wrapping up the shortened regular season at home against Clarkston, 7 p.m. Oct. 12.

Dragons and Wildcats battle to 2-2 tie on the soccer pitch added by mmkelley on September 30, 2020
View all posts by mmkelley →