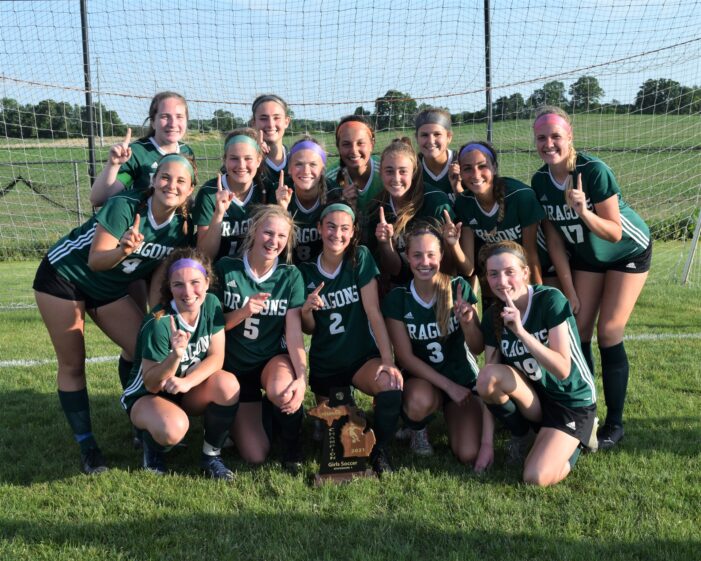 Lake Orion (14-4-2) now moves on to the first round of the MHSAA Region 2 playoffs against Walled Lake Northern (10-4-1) at Livonia Stevenson. That game was scheduled for Tuesday after Lake Orion Review press time.

“Any team that makes it out of districts will be a good team,” said Lake Orion head coach Chris Corteg. “I have a few people familiar with Walled Lake Northern and we’ll get the scoop on them. I’m sure it will be a tough match.”

To get to the District 6 final, Lake Orion beat Lapeer 5-0 in the first round and Davison 2-1 in the district semifinal.

Corteg praised the Dragon’s efforts in getting to the district final, and for coming from behind against Grand Blanc.

“This is such a special team. They get along…they’re a team, they blend together,” Corteg said. “We’re the sort of team (where) the parts are interchangeable. I said to the team, ‘We don’t really go up or done that bad and we can do this. And they did it tonight.’”

Lake Orion went down 1-0 with 11:37 left in the first half when Grand Blanc midfielder Sydney Lynch slotted the ball into the open net out of the reach of senior goalie Maryn Butki.

The Dragons revved up the pressure for the remainder of the first half and most the 40-minute second half but were unable to breath through Grand Blanc’s tough defensive line. Bobcat senior goalie Tobi Whitmore made several good saves to keep the Dragons off the scoreboard.

“We talked about it. We were behind against Davison one to nil, and we said, ‘Look, there’s a lot of time left. Better to be behind early and come back,” Corteg said. “We still had a whole half to come back. We adjusted our shape a little bit, went with three strikers, and it paid off.”

With 15:55 left in regulation, Lake Orion junior Kacy Lauer crossed the ball from the right side of the field, over the Bobcat defense, to the far side of the goal where teammate Annamarie Fosmoen fired the ball into the back of the net and tying the game, 1-1.

Heading into the overtime, the teams would have to play two 10-minute halves. If there was not a winner after that, the game would be decided by penalty shots.

“Heading into overtime we kept it pretty much the same,” Corteg said.

At 8:54 of the first overtime half, Lauer again fed a pass in front of the Grand Blanc goal, this time to sophomore Whitney Acker who put the ball into the back of the net, giving Lake Orion its first lead of the game, 2-1.

After taking the lead, the Dragons then moved a player to an extra defensive position, Corteg said. “We hung on; we were a bit lucky. There were some scary moments but, in the end, we held up.”

The Dragons and Bobcats had scoring chances during the remainder of overtime, but solid play from both defenses – including a great one-hand deflection by Butki, the Dragon’s MVP, with 3:05 left in the second overtime to keep her team ahead – led to a Dragon victory.

Versatility and depth were two key components to the Dragon’s victory, the coach said.

“This team embodies the traditional. It’s a team, and everybody works together. We have a number of interchangeable parts with players that play two, three different positions,” Corteg said. “We had a little situation with the prom being tonight, we lost four good players. But we told them before the game – we’re a team of 19 players and we can put people in different spots and cover and we’ll do alright. And, fortunately, we did.”

Corteg also credited his assistant coaches, Amanda Hutchinson and Jason Wise, both of whom are teachers at Lake Orion High School, and volunteer Alejandro Guajardo.

“They all had input, they all had observations that really helped,” Corteg said.