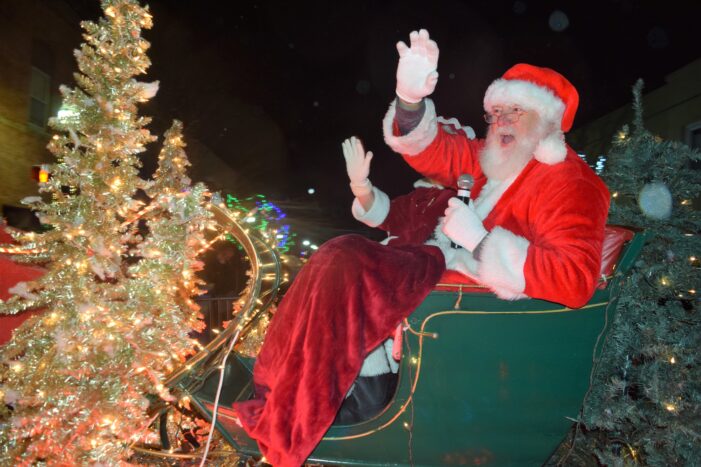 It’s been two years since the Orion Lighted Parade lit up the night with cheer in downtown Lake Orion, but on Saturday the parade returned to shed its light of joy on all the good girls and boys.

Orion businessman and philanthropist Matt Pfeiffer was the Citizen of the Year for his charitable efforts on behalf of the American Cancer Society and Real Men of Orion, Operation Warm and his overall support of all things Orion.

On Friday, Golling Buick GMC hosted the Holly Jolly Folly, the signature fundraiser for the parade, at the dealership.

The Orion Lighted Parade is one of the lighted parades in Michigan, typically featuring nearly 100 entries. This year, the parade was slightly smaller, largely due to a postponement. The Orion Area Parade Group postponed the parade, which was originally scheduled for Dec 4, just four days after the tragic shooting at Oxford High School.

In 2020, due to COVID-19 safety concerns, the Orion Area Parade Group canceled the lighted parade and got a small fleet of pickup trucks, loaded with costume-clad characters in the truck beds, and had a rolling daytime holiday caravan drive through several neighborhoods in the village and township.

For more on the Lighted Parade, visit orionlightedparade.org.

‘Christmas in Toyland’ parades through downtown Lake Orion added by mmkelley on December 22, 2021
View all posts by mmkelley →