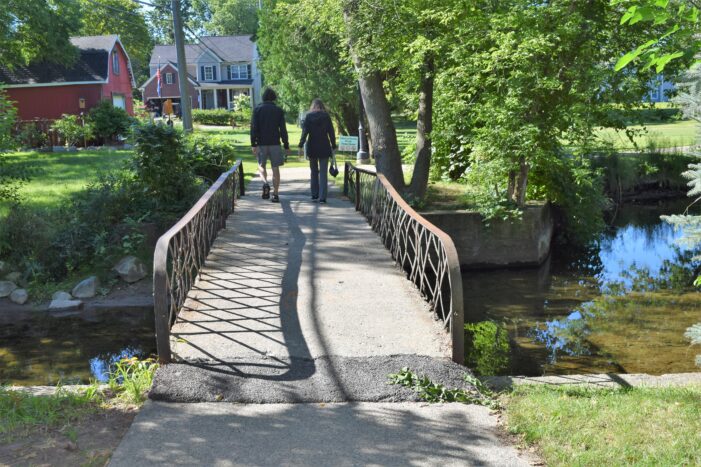 The Village of Lake Orion may be getting two new bridges for less than the price of one after a sweet deal with Independence Township.

The village got a pedestrian bridge for a mere $20,000 – which included the bridge, two approaches, the concrete footings and delivery. The bridge will replace the old Meeks Park bridge later this fall.

Village councilmembers and administrators had originally thought they would have to spend $95,000 on replacing the Meeks Park bridge, which connects the park with Washington Street over Paint Creek.

“We weren’t expecting that. It’s going to save a lot of money,” said village Manager Joe Young, who found out that the bridge was for sale.

The village will still have to pay for engineering fees and then go out for bid for installation of the bridge, but those costs should still save the village a bit of money. Especially since the village is checking into whether it can use part of the new bridge to replace the Children’s Park bridge, Young said.

“We’re looking to get a two-for-one out it, because we actually got more bridge than we expected,” said village council President Ken Van Portfliet. “And we’re going to reach out to the manufacturer and see if we can purchase an additional section because we need to replace the bridge down at Children’s Park as well.”

Replacing the Meeks Park bridge began with the village looking into stabilizing the banks of Paint Creek from erosion.

The village has applied twice – and twice been denied – for a bank stabilization grant to help with the costs of the project.

“We wanted to do a bank stabilization, which required replacing those two bridges (Meeks Park and Children’s Park),” said Young. “We applied for a grant, about $800,000, but we didn’t get it. In the meantime, we have this federal block grant money available through the county…the county said this is what you can use the federal money for.”

Because the Meeks Park bridge is in a low- to moderate income area with senior citizens, the Oakland County agreed to fund some of the bridge replacement project.

“So, that’ how it got picked. We really wanted to get the Children’s Park bridge replaced because it’s more heavily trafficked,” Young said.

The village also has $33,000 of community development block grant money (CDBG funds) and Orion Township committed $39,000 of its block grant money toward the replacement of the bridge, Young said, adding the Lake Orion Downtown Development Authority allocated nearly $29,000 of its Parks and Recreation millage tax capture to the project, which the village will use to pay the engineering cost.

Cub Scouts from Pack 233 also re-stained the wood bridge across Paint Creek near the Orion Art Center to the Paint Creek trail leading into Meeks Park. See next week’s issue for the photos and article on the scouts community work.

Building Bridges: Village of LO to replace Meeks Park bridge, repair others added by mmkelley on August 26, 2020
View all posts by mmkelley →