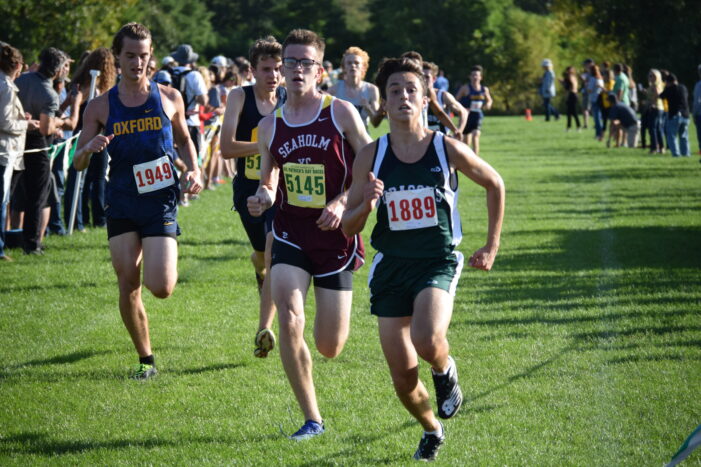 Citing concerns over the spread of the coronavirus (COVID-19), the Oakland Activities Association (OAA) decided to do away with the jamboree format in 2020 and instead have their member schools compete against one another in dual meets.

On Sept. 9, the Lake Orion Dragons, who reside in the Red Division, hosted the rival Oxford Wildcats in the first of five scheduled regular season contests.

On the boys’ side, the Dragons rode the strength of their pack to a 22-37 victory. Oxford senior Zach Patterson took home first-place at 16:53.59, winning by more than 35 seconds, but Lake Orion, which claimed six of the top-ten spots, had too much depth for the Wildcats to overcome.

Another junior, Jacob Gleason, an All-OAA Red honoree a year ago, finished sixth at 18:02.63, and sophomore Luke Peardon rounded out Lake Orion’s top-five with a 18:06.62, good for seventh-place.

“It fit the pattern we talked about earlier, if we’re going to win, it’s going to be based on depth because we don’t really have that No. 1 kid out there,” coach Stan Ford, a 39-year veteran of the position, said of the season-opener.

“When I look at how we finished, our top-five were within 38 seconds of each other and that’s indicative of depth and a solid team. Our top-seven were just over a minute apart, so, there’s not a lot of gaps in there.

“Overall, I think it did go well. A little surprised Adam Hafeli was our first finisher and he had a great day, finished within eight seconds of his PR (personal record). His PR last year was on a flat, fast course and this was our course, which is pretty tough, so, he had a really good day.

“Nick Laurent was our second guy and, based on practices, I would put him up even higher. He’s turned himself into a darn good runner and when you see him run, it’s just pretty. He’s solid and worked hard all summer long, and we can get away with him finishing behind Adam (Hafeli), but it’s not going to stay that way, he’s going to move up.

The girls’ race was almost a mirror image of the boys’ race, except the roles were flipped.

Dragons senior Sophie Novak, one of the state’s top runners, captured first-place with a 20:11.14, winning by a margin of 1:19.01. Oxford, however, placed seven of their runners in the top-ten, including three in top-five, to win, 26-33.

Showcasing the youth that provides reason for optimism for Lake Orion moving forward, two freshmen, Megyn Fox and Mackie Shoskey, finished in the top-six, registering a 21:41.7 and 22:11.23.

“I was super excited we went back to dual meets,” shared coach Debi McDonald, who is beginning her 20th year at the helm of the program.

“I loved when we always had dual meets before we went to the jamboree setup. Partially because, going into jamborees, I think the girls kind of had the expectation, ‘Oh, this is the place we were in the last jamboree, that’s probably what we’ll get in this one.’

“A dual meet can get a little more competitive because it’s one-on-one. I was a little shocked with the score, I thought it would’ve gone the other way, but, for a lot of these girls, they haven’t raced since last November, so, the fact we’re having a season, I’m happy, they’re happy. We’re going to get stronger; we’re going to get faster,” McDonald said.

Another consequence of the shift to dual meets is the upper-level runners like Novak, who finished 13th in the 2019 Michigan High School Athletic Association (MHSAA) Lower Peninsula State Meet at Brooklyn’s Michigan International Speedway, face less competition at the front of the pack.

To compensate for the smaller fields and shift in difficulty, McDonald is finding ways to challenge her star senior individually within the meet.

“This year will be a little more challenging for Sophie. We’re talking more about inner drive, pushing yourself, you know, it’s all new,” the coach said. “The next meet, we’re going to have goals for each kilometer and break down the course that way so we’re hitting the paces she wants to hit.”

Lake Orion will next be in action at 4:30 p.m. Sept. 16 against the Rochester Adams Highlanders. Their second-straight home meet to begin the season, the Highlanders will represent a difficult matchup for the Ford’s and McDonald’s squads.

The Rochester Adams boys, who Ford views as the favorite in the division, are 2-0 (1-0 OAA Red), with victories over the Utica Eisenhower Eagles and Clarkston Wolves.