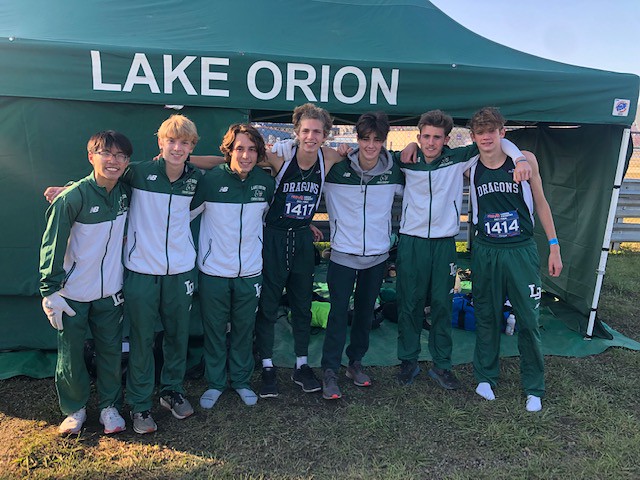 The Lake Orion boys varsity cross country team capped off an incredible season by finishing ninth in the state finals on Saturday.

Besides a top 10 finish at the state meet, the team is also OAA Red League champs and Oakland County champions.

“Our Pre-season goal was to be in the top 10 (in the state). The boys did their ‘pack’ running and finished ninth! Congratulations on a great season! League champs, Oakland County Champs, 9th in the state!” head coach Stan Ford said.

Ford has said all season long that Lake Orion’s depth and consistent running from the boys as a group would be the key to their success. The Dragon runners consistently had multiple runners finish in the top 10 in races this year.

Lake Orion finished with 264 points, good for ninth place out of 27 teams at the state finals.

Brighton won the lower peninsula state meet with 141 points, followed by Caledonia in second and White Lake Lakeland in third. Romeo was fifth, Traverse City Central was sixth, Grand Haven was seventh and Saline was eighth, just five points ahead of Lake Orion. Rockford rounded out the top 10.

The Dragons have seven titles this season. The team won the Anchor Bay Early Bird invite on Sept. 2, the Averill Invitational on Sept. 11, the OAA Red Jamboree 1 on Sept. 14, the 53rd Holly/Duane Raffin Festival of Races on Sept. 18, the Oakland County Cross Country High School Championship on Oct. 9, the Oxford Invite on Oct. 15 and the OAA Red Jamboree 3 on Oct. 21.

The Dragons finished second to Brighton at the Mott Fall Classic on Sept. 25 and second to Oxford at the OAA Red Jamboree 2 on Sept. 28.

Boys cross country team finishes ninth in the state to cap off an incredible season added by mmkelley on November 10, 2021
View all posts by mmkelley →