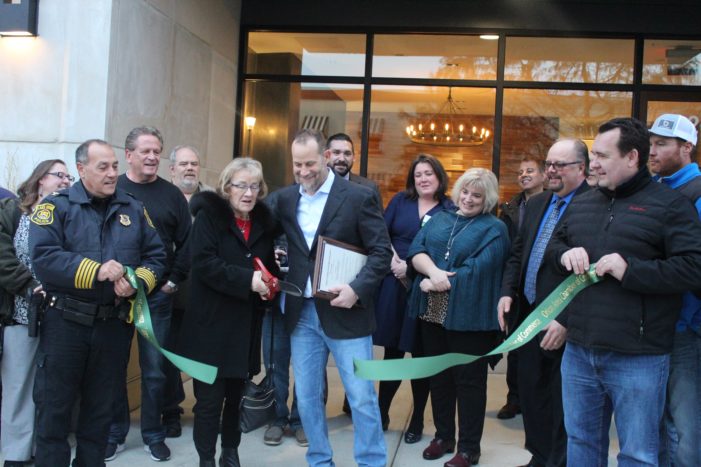 The ribbon cutting for 120 S. Broadway took place on Dec. 5 with friends and family of property owner Jeff Schmitz filling bar/restaurant Bitter Tom’s for a first look at the completed projects.

Construction on the four-story mixed-use development began late 2017 and being completed only recently.

The development is set to include several businesses as well as 24 luxury apartments/penthouses, eight of which have residents living in them.

Currently, the only business open in the building is Simply Marcella’s while Bitter Tom’s Distillery is slated to open sometime this month. Also claiming their space in the downtown will be a Keller Williams Real Estate office and Lake Orion Beauty Bar and Medical Spa.

Schmitz, who also is the current owner of the Pet Centre lot located on the corner of Anderson and Flint Streets, has become a prominent investor in the Lake Orion downtown, investing $8.6 million in the four-story development alone.

Schmitz hopes that his addition to the downtown will create what he calls a “culturesphere” within the community.

What makes up a “culturesphere”?

“Everything about it, there’s so many parts that come into play; the architecture, the appetite for the community, the style of the community,” Schmitz explained. “What this community doesn’t really have is downtown living…work, live, stay, play…and hopefully fit into a motif that will continue to expand and grow.”

“When we first looked at this project, we were like, ‘great project, but you never know,’ and today it’s built,” said Village Counsel President Ken VanPortfleit. “The thing I didn’t know was that we got a good friend and a good community…thank you.”

“I just want to set the stage everybody,” said DDA Executive Director Molly Lalone. “Let’s think back to a field in the middle of downtown with one little empty house. And look what we have now. Jeff, thank you. Twenty-four people, twenty-four houses, right here in downtown.”

Schmitz thanked the village counsel, the planning commission, the DDA and others before passing the scissors to his mother Mary to do the honors of cutting the ribbon.

For more information on apartments and amenities visit 120southbroadway.com.