Transgenderism is nothing new at Casa d’ Rush 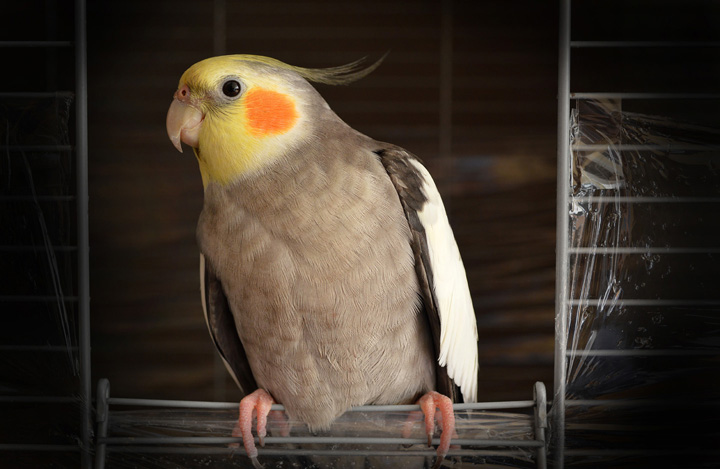 So, I am working on this book, Don’t Rush Me, I Am Making Mistakes As Fast As I Can (or, How I wrecked my kids), a book for dads. And, I just finished the first draft of Chapter 4, Pets and Kids. In this chapter I had to go back into the time machine inside my brain and remember all of the pets we had at the Rush pad when our boys, Shamus and Sean, were young.
Since the old time machine inside my head is jammed- packed with useless information like, “Where is life a holiday? Answer: On Primrose Lane”, it’s getting harder and harder to pull out the useful things packed up and shoved in there.

That being said, much like TV-land’s Captain Kirk in the Kobayashi Maru incident, I cheated. I went back and read some old columns because I knew sometime in the past pets were major subjects of Don’t Rush Me columns. And, during said research I ran across this little diddy from 12 years ago. I had forgotten about Moe, the amazing dogbird. So, here it is.
* * *

August 8, 2006: A while back we “inherited” my Grandma Rush’s pet cockatiel. For those not in the know, a cockatiel is a bird. And, for those wondering, Grandma Rush, 92, is still alive and kicking and playing bingo and watching movies and getting her hair and nails done and — well, she’s doing quite well, thank you.
According to the Australia On-line Museum website (www.amonline.net.au), Nymphicus hollandicus (the cockatiel), “is an unusual member of the cockatoo family.” The source didn’t say why the Nymphs are unique, but with a genus like ‘nymph’ it’s got to be good! Anyway, nymphs are widespread throughout the mainland of Australia, but not found in any other country — unless of course you count all those kept ‘nymphs’ in cages around the globe.
Our nymph’s name is Moe — short for the man who parted the Red Sea, Moses. Moe is part of our growing pet family that includes the pet matriarch Pork Chop (Canis Crankasarous); the dearly brain-dead Mickey (Canis Dimwhitticos); the smelly, 110-pound black lab Booker T. (Canis Largepoopicoccous); the gray killing machine Kicia (Felis Occisor); the striped tabby Thomas (Felis Jerkimous); and four lesser creatures, two guinea pigs and two rabbits — who really don’t matter much.
Moe sits above them all — mostly so the others won’t eat him. His cage is perched high atop a corner cabinet, about six feet off the floor. Moses really is amazing. Don’t think so, read on.
In the short six months he has lived with us, our very old dogs (Pork Chop, 16; Mickey, 14; and Booker 11) have trained him to “bark.” Yep, whenever a leaf rustles across the lawn or in the trees, or a passersby passes or the wind blows the wrong way outside, just like our geriatric canine pack, Moe will “bark.” Of course, his bark is more like a loud screech than a woof, but it’s all about the effort, right?
What’s more amazing is in the past six months our dogs’ hearing has really deteriorated. They can’t hear us (or chose not to), but they can hear Moe’s screeching and squawking. I guess you can say the proverbial tables have turned these. Now, Moe has trained the dogs to bark. When they hear him sound the alarm, they all run to a door and bark at what they don’t know . . . but they did get the signal from Moe, so it has to be big, a national state of emergency — something like Defcon 1 status. So, they bark.

(By the way, Defcon is a word that means Defense Readiness Condition. There are five conditions that the Joint Chiefs of staff and the ground commanders use. Defcon 5 is the lowest, or best of all worlds condition. It stands for “normal peacetime readiness.” Defcon 1 is a real bummer for the peacenicks as something’s gonna’ get broke and somebody’s gonna’ get hurt. It stands for, “Maximum force readiness.” But enough of military lingo, let’s get back to the bird.)

Somehow, I don’t really feel any more safe now that our watch-dog-bird is on duty along side of our actual “watchdogs.” I digress. In my negativity, I veered away from telling you all about the wonderfulness of Moses, our cockatiel.
Get back on point, Rush.

We actually bought Moses for Grandma Rush last year. The previous owners said he was a good bird. He liked to go on car rides and liked to have his head scratched. All true. However, as hard as they tried, they could never train him to speak (obviously he doesn’t understand Homo Erectus, only Canis).
As I sit here typing, I can honestly say, Moe is an our amazing avian friend. Not only does he have the heart of an American Eagle, on-guard ready to protect our home, he can also . . . well, he can lay eggs.
It’s a miracle! Or not . . .
I guess that makes him the Amazing Transgender Moe. Either that, or it makes him Maureen. Which really means Maureen isn’t a he at all, but a she.
Maybe Moe’s not really that amazing. I wonder if she tastes like chicken?
Comment for Moe’s male person Don, can be e-mailed to DontRushDon@gmail.com

Transgenderism is nothing new at Casa d’ Rush added by Don Rush on August 8, 2018
View all posts by Don Rush →