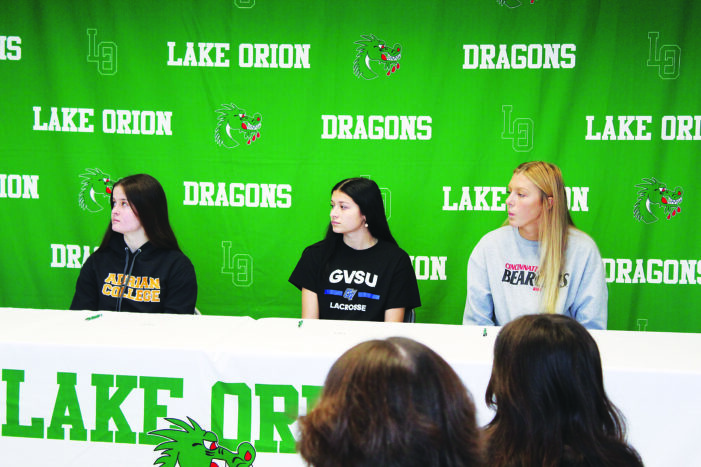 “(This) is always a very special day. This is the first of three singing dates that we have here at Lake Orion High School and we’ve got a great group to kick us off,” said LOHS Athletic Director Chris Bell. “Every year at Lake Orion we usually have between 20 to 30 student-athletes who will sign to play collegiately at multiple levels and it’s been a big deal for a long time. We like to celebrate it because there’s a lot that goes into it, not just with the student-athletes but also with moms and dads and grandmas and grandpas.”

Shonts, who signed to play ice hockey at Adrian College, was introduced by head coach of the varsity girls lacrosse team Meghan Allcorn.

Shonts has played ice hockey for seven years, has been a state runner up for three years and won the first annual women’s National Silver Stick Tournament. She plans to major in Exercise Science with a minor in Leadership.

McElroy, signing to play lacrosse at Grand Valley State University, was also introduced by Allcorn.
McElroy is a four year varsity girls lacrosse player but has been a multi-sport athlete her entire life. Last year, she was named second team all-state by the Michigan Women’s Lacrosse Coaches Association. She was also named OAA All-League the past two years and was the team MVP her sophomore year.

Last up was Horning, who signed to play volleyball at Cincinnati University, and was introduced by varsity volleyball head coach Tony Scavarda.

Horning is a four-year varsity volleyball player and has led the team in kills all four years. This year, she was a finalist for Miss Volleyball Michigan, where she finished fourth and was named an ADCA All-American. Horning was a vital part of several state final runs and a good amount of district and regional final victories.

Bell reminded the athletes of the opportunities ahead of them and reiterated that even after they leave Lake Orion, they will always have support back home.

Three LOHS student-athletes sign letters of intent to continue their athletic careers in college added by James Newell on November 23, 2022
View all posts by James Newell →