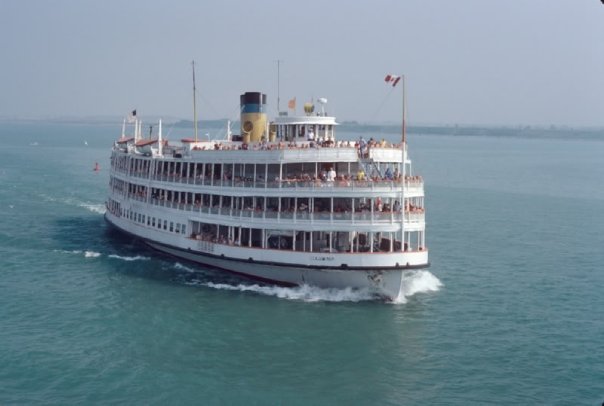 Here's a picture of the Boblo Boat SS Columbia I found on the FB page, Boblo Island Amusement Park.

By writing — by sharing this maybe, just maybe, I can help others who had this terrible experience come to grips and move on with their lives…
* * *
Part of growing up as a person, maturing if you will, is understanding your past as it relates to your present, and therefore your future. (I think I am getting pretty good at psychobabble, don’t you?)
To most casual observers I am the quintessential happy-go-lucky kind of guy. I smile when things get rough. I laugh in the face of danger. I am Don, hear me roar! But under the cool, calm exterior, lurking just below the surface, is my true, shy, afraid self.
In a word, your hero, Dandy Don Rush, is a worrywart. If I start to think something is amiss, or not as it should be, an icky feeling creeps up my spine and takes root in my head. I’ve been this way so long, I just figured it was part of my genetic code. An abnormality passed on from mother and/or father to son. I presumed that’s just the way the chips were stacked and so I would just have to grin and bare it and grieve inside. Alone.
But no more!
By some quirk of fortune I unearthed the impetus to my condition. The veil which shrouded my being was pushed aside and I now can start exercising the devil that resembles a short, little man with a sea captain’s hat and uniform.
I’ll try to explain.
* * *

Like many children reared in Southeastern Michigan up until the 1980s, I have recollections of yearly trips to Bob-Lo Island. Every summer we’d go. We’d hop on the Bob-Lo Boat (either the Ste. Claire or Columbia) in downtown Detroit and take the 45-minute steamer cruise to the amusement park.
We’d throw popcorn off the side of the boat and watch the gulls complete the catch with deft aerial acrobatics. We’d stick close to the adults as we made our way through the throngs of people to make it to the top and front of the boat.
We felt the wind on our face and we’d be last off the boat, because we were the farthest from the door. We’d shuffle as fast as we could from the boat, under the tunnel-thingy that led to a day full of fun. We cruised the midway, the haunted house ride, the Ferris wheel, the roller coasters, the kiddie rides — we did it all.
After the day was done, after all the laughter and shenanigans, when we’d have to leave the island and go back up the Detroit River, without fail I’d go still, stop smiling and talking and start to worrying.
Inside my head, I’d hear a scared little voice. “Where’s my ticket?”
Without letting any adult know, I’d desperately search my pockets. Rocks, tokens, pocket knife, hard candy, quarters, dimes, nickels, pennies, marbles, string, lint. My pockets always bulged with stuff but, almost always my ticket — my way back home — would be missing. Long before ABC had a hit TV show about being stranded on a strange island, I dreaded being Lost on Bob-Lo.
Most folks who experienced Bob-Lo have fond memories of all the island’s wonderfulness. My most vivid memory is worrying that since my ticket was lost I would have to stay on the island. To a kid who read Stephen King’s Salem’s Lot and Bram Stoker’s Dracula by the seventh grade, the island was way cool during the day, but it was dang creepy at night. My rather large gut still tightens up as I recall those thrilling days of yesteryear.
Did anybody else ever think they’d be left on a deserted Bo-Lo Island?
I didn’t know what caused my childlike mind to think my family would leave me stranded. I didn’t know why I worried so. So yes, I was a worrier then. Yes, I worry now — but, I can firmly confess today it is not my fault. It is not a genetic malfunction passed on to me from my parents. I know why I became a worrier.
My worrysomeness is all Captain Bob-Lo’s fault. Damn those smiling eyes and his cockeyed cap!
* * *
There’s a book called Bob-Lo Revisited, by Bill Rauhauser. This book contains about 100 black and white photos about the Bob-Lo experience. From boat ride to the island, island fun and back to Detroit. (FYI: It’s available on Amazon for like 60 bucks.)
And, it is in this book I found the source of my worrywartidis . . . in one of the 100 photos is a picture of a sign that hung above the island entrance/exit. A sign obviously nobody, except Young Master Gullible Rush read:

The sign went on for another half dozen or so words, but I can positively say, I didn’t read further. I read:

Lose your ticket, kid? Good luck. Have fun with all the fanged creatures of the night. Surviving this creepy island in the middle of the river with no lights and no way off is unlikely.”
* * *
Well, I feel better now that I have that off my chest. How about you?
Send your thoughts or concerns to Don via e-mail: DontRushDon@gmail.com

Sometimes you have to share, to heal (or something like that) added by Don Rush on October 25, 2018
View all posts by Don Rush →