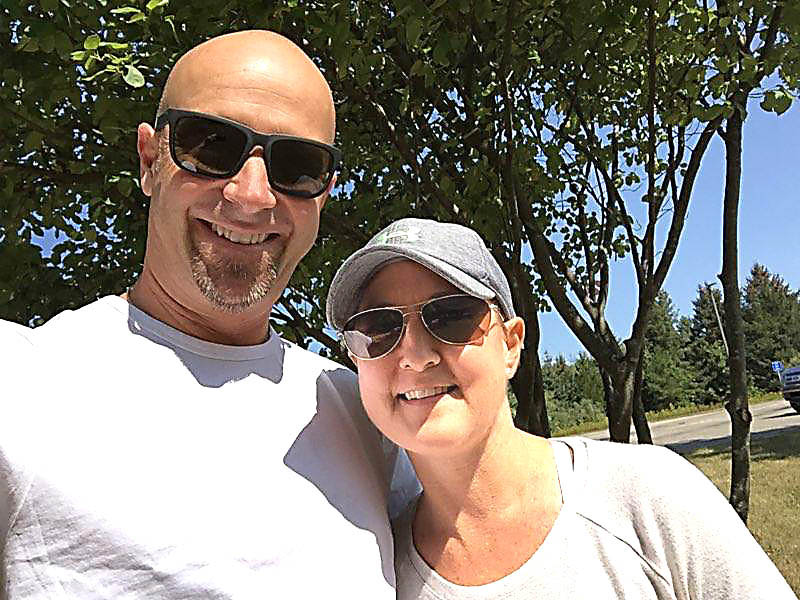 So, there I was minding my own business and sharing it on social media, whilst reading up on everybody elses business on same said social media when . . .

. . . I got a message from a young lady I had a crush on when we were both in the third grade at Bailey Lake Elementary in Clarkston. Unfortunately she wasn’t messaging her unfulfilled and undying love for me. No, much more serious and not at all fun. Cheri’s sister, Maggie Barnard Wade, has Stage III Anaplastic astrocytoma (which has too many syllables for me to say) . . . well, let me let Cheri (who has started a GoFundMe page) tell the story in her own words.

In July this year, my youngest sister, Maggie (aka Georgetta) was 46 years young. She went shopping for a baby shower present and had a sever seizure. Not a little one…a BIG one. She felt no symptoms before it happened. No warning.
She woke up as the ambulance was taking her to Beaumont Hospital in Troy. Seizure means brain, so they did the first of many MRI’s. There was a mass – but with no defined edges – meaning cancerous.
I got the call and immediately headed south from Harbor Springs. My sister Penny started the drive from Wisconsin, and our sister Cameo made arrangements to fly in from California. We all met at sister Ronnie’s in Ortonville and headed to the hospital where we would stay…. For the next seven days.
We left our suitcases in our cars and took turns spending the night, running for food, washing clothes. Between her husband, children (Lake Orion grads, Dallas, 22 and Madelynne, 19), and sisters – someone was with her 24 hours. She was never alone. We dealt with this head on and as a family.
It was determined that Beaumont was not the best place for her to be because of the type of tumor she had. A bed opened up at Henry Ford and off we went…all of us…more like a parade than a caravan.
Something else was happening. We five sisters had had our ups and downs over the years. Sometimes we weren’t speaking to that sister, or was mad at another sister. We honestly could NOT remember the last time the five of us were in the same room together. It has been YEARS! Like over 20! From the moment we all walked into Maggie’s room – the years honestly melted away (I know it’s a cliché – but it really happened).
It is horrible that this is what brought us together, but it did. We talked for hours and laughed so hard we actually cried! We ate all of the meals together (we would order out, or bring food from home) and rarely had less than 6 people in her room at any time, often over a dozen! . . . And we have continued to strengthen the sister bond since. We now have a group sister chat where we chat daily online! We are closer as a family than we have ever been!
Maggie is strong in her faith. God works in mysterious ways THAT’S for sure. This wasn’t in the cards. This wasn’t in the plan. This wasn’t in the budget. But it was happening, like it or not, one way or the other. I cannot begin to say I understand what she was feeling or thinking, I can’t even imagine. But with each doctor discussion, and with each question and answer…she said…out loud… I got this…and I believe she did.
Day of the surgery…we had the LARGEST group in the waiting room. I think we counted 21.
Maggie is my baby sister. I feel an extra sense of protection over her. But to see your baby sister, in a bed, tubes everywhere, her head wrapped in a bandage is gut wrenching. Helpless and powerless – you can’t cry – you have to be strong. We were warned – she may not be able to speak, or lift her right side. We prepared for the worse and got the BEST. She held our hands, and talked. WOW! She had 50 some odd staples from right to left a crossed her head – but she was beautiful and alive and our baby sister. The darkness of despair was drowned out by the light of hope.

She has Stage III Anaplastic astrocytoma. It is my understanding that stage III means it’s growing, but not spreading. So next came the chemo and radiation. Kill the bastard, retard the growth. Radiation meant hair loss – she’s still beautiful – with or without a hat. MRI in Oct showed that the chemo was doing its job and no new growth – just a big ol’ whole where that nasty thing had been which would eventually fill with fluid.
So…life moves on, doesn’t stop for anyone for any reason. Life may be a merry-go-round but you’re not allowed to get off. They had sold their house in Orion, were living in an Oxford apartment while their house was being finished in Florida when this happened.
It’s hard to ask for help. It’s embarrassing and feels shameful to have to tell friends and families your “personal” problems – that you can’t make it on your own. But it’s a necessary evil. If you don’t ask, you won’t’ know. ~ Cheri

I have communicated with Cheri since I received the above story. Maggie and Scott (both Clarkston High School grads), after insurance and not including upcoming medical costs are in the red over $20,000. If anybody would like to help, hop online and go to (or click here) www.gofundme.com/MaggieMatters.
Thanks, Cheri and prayers to you and yours.