Protected or not, still a knuckle-draggin’ you know what

It’s been what, five years since I reported some very scientific news to you all in regards to Neanderthal genetics related to yours truly. And, it’s been only about four years since I shared with you this:
“When I die, on my tombstone and in my obituary, I want to be known as Don Rush, the Neanderthal Philosopher.”
I think it’s only appropriate given I still hold some truths to be self-evident. (You know, things like “life ain’t fair,” “2+2=4,” “do your best,” and “Life is hard; it’s harder if you’er stupid.”) Opinining over the years on such topics has given folks the opportunity to write me things like this from 2008:
“Dear Bone Head,
I can see you are a very lonely man.
It’s an obvious deduction by the subject matter of this week’s column; the majority of your column’s followers (or rather responders) are women. As my deductions go, we women are not waiting with baited breath by the mailbox for your divine thoughts, observations and rantings. Life is beautiful, birds are singing, flowers need tending, lemonade is to be made, fireflies to catch, sprinklers to be danced in and hammocks that need to be swung. I can only imagine you sitting at your desk, refreshing your ‘Check Email? button over and over ’til it hurts. Donny Boy needs some attention . . . Blah, Blah, Blah . . .”
Love notes like that and the report from 2018 which showed “ . . . You (I) have 285 Neanderthal variants . . . you have more Neanderthal variants than 61 percent (of the tested population) . . . However, your Neanderthal ancestry accounts for less than 4% of your overall DNA.” have led me to my knuckle-draggin’ conclusions. I am the modern-day Neanderthal Philosopher. 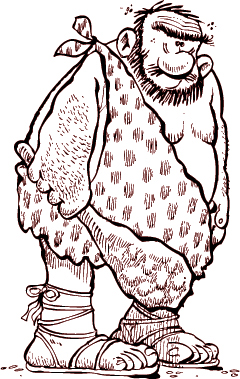 And, that was that until earlier in the year when my very own mother’s brother, Uncle Jim, sent me a text. In the text was a photo of what he was looking at on his computer screen. A headline simply said: Neanderthal-inherited gene variant helps in protecting against severe COVID-19.
And, the first line (all that was in my text): A protective Neanderthal-derived haplotype confers approximately 23% reduced risk of becoming critically ill on infection with SARS-CoV-2 . . .
Imagine my reaction upon reading that.
As an American of Irish descent, my feet (on their own accord) went into a little happy dance, a jig if you will. Woo-hoo! That was like the first good news I have heard in like three years. A wop bop a loo bop a lop bam boom! I got extra protection by being a caveman! BAM!
Since then my enthusiasm has waned, just a little because the further I went down the old internet search engine rabbit hole I have found differing studies and conclusions on the subject. First, who were the Neanderthals?
Neanderthals were a different species of archaic humans who lived in Europe and Asia. They became extinct around 40,000 years ago, although 2% of the DNA of people living in Europe and Asia derives from Neanderthals. Our ancient ancestors had some “daliances” with Neanderthals and and that’s why many of us today are packin’ Neanderthal DNA in our blue jeans.
What the heck? According to one article on MedicalNewsToday.com, “In the research, the scientists found a Neanderthal gene variant on chromosome 3 that significantly increased the risk for severe COVID-19 symptoms. They found having this variant meant there was a 60% increased likelihood of being hospitalized.”
However, later on in that article: “The latest study from the same team of scientists found another Neanderthal gene with the opposite effect . . . Using data from the Genetics of Mortality in Critical Care consortium, the team found a genome type . . . appears to protect against severe COVID-19. The researchers say the presence of each copy of OAS1 reduces the need for intensive care by around 22%.”
Yeah. I am confused, too . . .
. . . which if I were to draw out a conclusion from that, it would be this: My confusion may be based on having more Neanderthal variants than 61 percent of you out there reading today. That being the case, can you please enlighten me, your Neanderthal Philosopher?
Remember. Spring will get here sooner or later. Smile and be nice. Email that knuckle-draggin’ Rush at DontRushDon@gmail.com.

Protected or not, still a knuckle-draggin’ you know what added by Don Rush on March 30, 2022
View all posts by Don Rush →