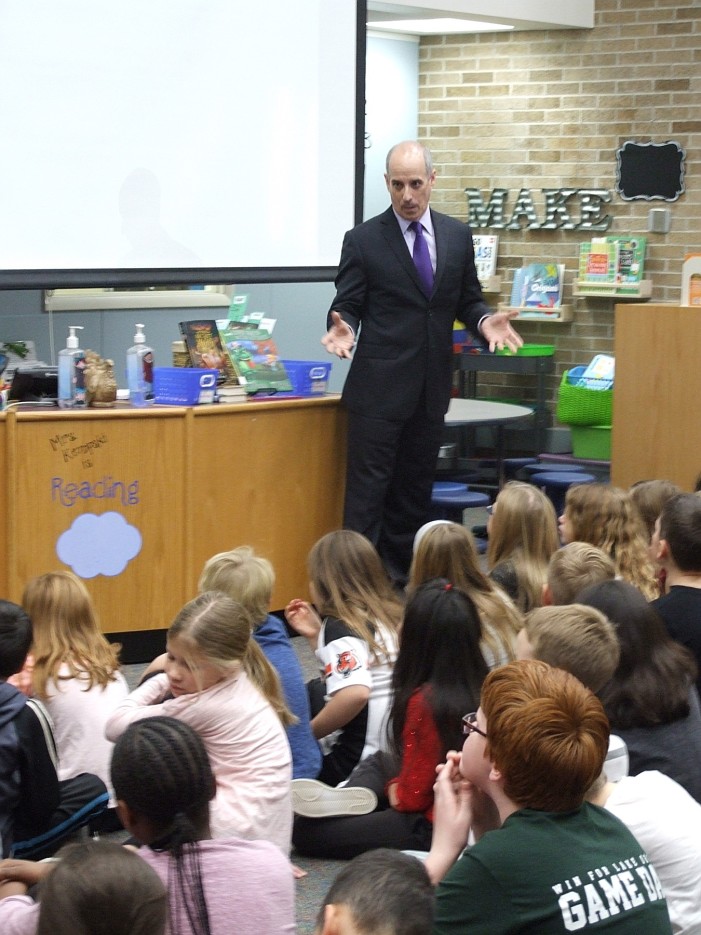 By Georgia Thelen
Review Staff Writer
Detroit’s own meteorologist Paul Gross visited Pine Tree Elementary on Nov. 21.
Channel 4 WDIV meteorologist Paul Gross is a seven time Michigan Emmy winner and has also published a book, Extreme Michigan Weather: The Wild World of the Great Lakes State. Gross visited Pine Tree to teach students about the “ingredients of weather”, specifically storms, tornados and hurricanes. Gross says he enjoys going to elementary schools to show children that science can in fact be cool because “it’s kinda neat when you can have fun and learn at the same time”.
Gross shared his story of his growing love of weather and how he knew at a very young age he wanted to become a meteorologist. When Gross was in second grade, he was extremely frightened of thunder and lightening during storms. His teacher took him to the library and he checked out books on weather and how the science behind weather really worked. The more he read about thunder and lightening, the more he learned about them. The more he learned about thunder and lightening, the less scary they eventually became. It took Gross the entirety of second grade to decide he wanted to be a weatherman someday.
“If you want something bad enough, you can have it,” said Gross, regarding how hard he worked in school to reach his goals of becoming a meteorologist. “I had to take extra time to do homework and study for tests.”
Gross continued to make science fun for Pine Tree students by explaining the H’s and L’s of a weather map regarding air pressure as compared to a bathroom scale, both a scale and barometer weigh things. Gross illustrated cold and warm fronts moving in by using a projector and explained to students that these fronts are what contribute to tornadoes.
According to Gross, the ingredients needed to make a tornado are: air, strong winds that change directions, high wind speed and a cold or warm front to get the air moving violently upwards. He also covered how to safely take cover from a tornado whether at school, home or elsewhere. In comparison to a hurricane, “a tornado is actually really small”, said Gross. Most tornadoes are only about 100 yards wide, whereas hurricanes can be the size of a state. Hurricanes are only formed over water that is 82 degrees or warmer.
Students learned the science behind hurricanes. They were taught that the water all comes from evaporation during warmer months and it is expressed back onto Earth during the cooler months when the atmosphere cannot hold it any longer.
“A hurricane is mother nature’s way of returning that water back to the ocean,” said Gross.