Peanut Gallery (that would be you) to the rescue!

So, Monday night I was lulled to sleep by the soundtrack, dialogue and carnage that is that cinematic masterpiece Killer Klowns From Outer Space, and somewhere between evil Klown snickering and screams, just before my brain turned off, I thought, “Rats. I didn’t write that column . . .” 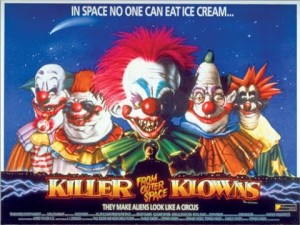 * * *
Good morning, happy day after Independence Day! Got to work early, spent 30 minutes getting my work, 2002 Windows XP to finally boot up and thought (after the cussing and colorful metaphors), “I need to get my 1,561st column out!”
Then I remembered an email from Lake Orion’s lovable curmudgeon, Bill Kalmar. Wrote Bill, “Don – do you really write out in long hand your columns? And if you type it later do you use white out when there is an error.? Or do you make a stencil too? And, I see you write in something called cursive which was outlawed several years ago by students who only print and write in caps! Don, welcome to the new world of writing! You can now talk into your iPhone and have those words transcribed onto a disc where it then can be printed. Wow! Well, somehow your system works for you so continue on my friend! –Bill (still writing in cursive)”

* * *
Bill, thanks. Yes, I type them on the computer after writing cursive. Except this week. Straight electronic magic.
* * *
Then, I thought, “Wait a cotton-pickin’ minute! Last week I went to social media and asked all my 635 “friends”, “Putting this out to the Peanut Gallery — have a short week this week, I just finished one column, now I gotta write another. Any ideas on what I should expound on?” I think the rest of my job this week is done! Following is what them Peeps wrote back — all good ideas for the future.
* * *
Alys Swan-Jackson: Hmm?
Barb Fahlquist: How about the recent tendency of the younger generation to #audulting every accomplishment they achieve. Guess they’re looking to get a “Participation Award” for doing what mature adults have been doing forever. Any thoughts?
Bill Innis: Clarkxit – Clarkston Village’s exit from the rest of Independence Township.
Kevin Thomas: how about what kinds of food served at Fourth of July parties that differ from normal of hot dogs and hamburgers?
Kathy Lamphere Sowles: So sick of hearing about everyday crap, racism, politics, crimes, social media, money, Hollywood; ideas of what to talk about? . . . I always love talking about food or reading about it… It’s usually a topic that makes people happy
Kris Sexton: What brings joy into your life? Write about things you can do to brighten up someone’s day. Tell us about someone you wish you could see again. What do you love the most about your job?
Jay Bleim: (write about) Clarkston United Methodist Church’s Adult Righteous Mission Project at Hope Hospitality & Warming Center this week.
Susan Sajdak: Ok, end of June, year is half over. Anyone still working on their New Year resolutions? What’s the rest of the year likely to bring? How many more days of summer?
Terri Faulkner DeMasellis: What do you love most? Pure Michigan Summers, the foliage, indigenous peoples, Hillary Clinton … pick one…
Cory Johnston: An idea has been rattling around in my head and it might sound better rattling around in yours. What is the role of government? The Village of Clarkston has recently shown a complete lack of understanding for the rules and laws that are supposed to govern what they can and cannot do, including the rules they created. The public appears to be far better informed and aware of this than those that make the decisions. Independence Township on the other hand has come out of a pretty bad political era and now seems to be open and honest about what they are doing and why. The city of the village wants to build walls and security measures in the tiny village offices, in addition to all the cameras they already added to the park, because . . . As usual, longer than I had planned.
Rob Schroeder: four (4) day work weeks are becoming part of today’s work-force
Mark Kopp: Fireworks and how dry it is from lack of rain?
Andrew J. Dubats: best summer grilling practices
Rob Butler: Write about how corrupt the mainstream media, Barack Obama & Hillary are. Oh wait that wouldn’t be an article it would be a volume of books.
Wendi Reardon: How one of your reporters challenged you to Camp NaNoWriMo during July… on Facebook …because you were looking for column ideas. Muahahahaha
Robert Roth: How to spend $75 million on Clarkston schools without a tax increase?! Hmmmmm?!
Angela King Herdman: Whether cities should impose a ban on fireworks or not because of the safety concern with our current lack of rain.
Patrick J Kittle: How about something positive. Our own Judge Kelly Kostin co-presides over the North Oakland County Veterans Treatment Court. Judge Kostin has some unbelievable first hand accounts of how VTC saves lives.
Hollie Luter Giannaula: Something about education. Find a teacher who is working his/her butt off over the summer to get a leg up on the next school year. Write about the need to create independent thinkers who can focus and execute tasks? We are trying to hire competent workers and are finding a plethora of entitled, unfocused 20-somethings that need their hand held to get through the day. After being in education for the past 8 years, I am seeing the repercussions of helicopter parents and everybody gets an A.

Peanut Gallery (that would be you) to the rescue! added by Don Rush on July 6, 2016
View all posts by Don Rush →