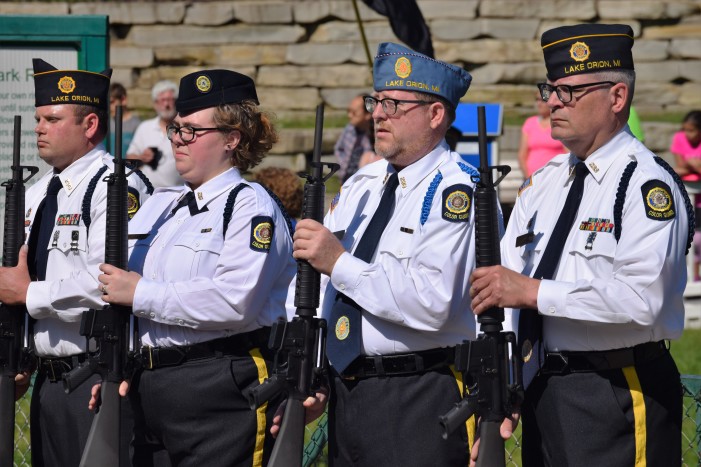 Each chime of the bell was a melodious, yet somber reminder of the toll taken on Orion’s veterans as members of the North Oakland VFW Post 334 read the names of the 41 Orion military soldiers who have died in service to their country.

The Memorial Day ceremony at the Orion Veterans Memorial on Monday was the culmination of the day’s events, with veterans, family and community members showing their support for those who have died — and their appreciation for those yet alive who have served.

“To the honored dead who have made the supreme sacrifice for our country…” said Dr. Joe Mastromatteo, VFW Post 334, “…On Memorial Day we do not honor any individual…On Memorial Day we honor the 1.2 million (from the Civil War to Operation Enduring Freedom) who gave their lives…”

“Memorial Day holds a very special place in my heart because I have brothers-in-arms who did not come home,” Hubbard said. “Each gave their lives so that generations of Americans to come could live in freedom.

“Teach your children and grandchildren about those who did not come home,” he said.

“May God Bless us with world peace,” Mastromatteo said. “…The home of the free, because of the brave.”

Prior to the Memorial Service, veterans and family members laid wreaths on the graves at Eastlawn Cemetery.

A special ceremony at Children’s Park honored those veterans lost at sea, with a wreath tossed into Paint Creek in symbolic remembrance, followed by a gun salute from the Lake Orion American Legion Post 233 Color Guard.

WWII veteran Bob Butler was selected as the 2017 Lake Orion Honored Veteran by the American Legion Post 233 and the Lake Orion Police Department.

Orion Veterans commemorate Memorial Day with service, activities for the community added by scarroll on June 1, 2017
View all posts by scarroll →